Treatment with a metofluthrin-impregnated plastic strip in a room, Do Son. 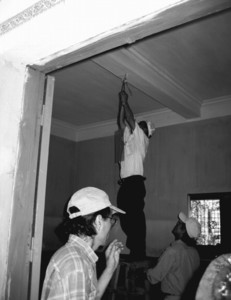 Spatial repellency of metofluthrin-impregnated polyethylene plastic strips against mosquitoes, Aedes aegypti and Culex quinquefasciatus, were studied in a residential area in Hai Phong city, Vietnam. Thirty houses were selected as trial sites; half of these were assigned as untreated control and the other half were assigned for treatment. Primarily, irrespective of the room size, one room was treated with one strip. The dominant species in the trial sites were Culex quinquefasciatus and Aedes aegypti. A rapid decrease in the mosquito index was observed immediately after the treatment with metofluthrin strips, and treatment was effective for at least 6 weeks.