Linear regressions of the log-transformed numbers of domestic Triatoma infestans by timed manual and knockdown collections (A), and of mean triatomine fecal smears per house-month in sensor boxes and total numbers of domestic bugs by timed (adjusted for linearity using the equation in A) and knockdown collections (B) in Amamá, Argentina, March 1992.

Observed (bars) and expected (line) age-specific sero-prevalence rates for Trypanosoma cruzi infection in dogs from Amamá, Argentina, March–October 1992. The line is the fit of the catalytic model with constant force of infection over time and age. Numbers above the bars represent the numbers of dogs examined for infection.

Incidence of Trypanosoma cruzi infection in A, children ≤ 16 years old and B, proportions of T. cruzi-infected domestic Triatoma infestans according to the household presence of infected dogs in 1988–1989 and 1992 in Amamá, Argentina. Numbers above the bars represent the numbers of children seronegative for T. cruzi in March 1989 with permanent residence at the source home (A) or bugs that were examined for infection (B). 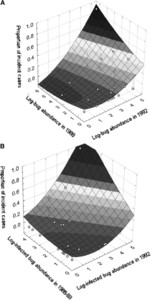 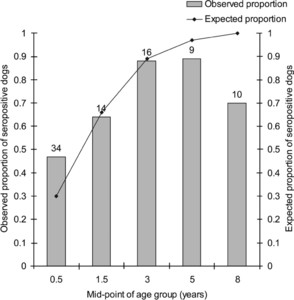 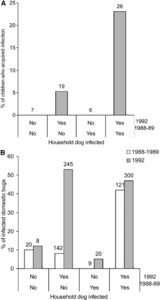 Following increasing reinfestation with Triatoma infestans after insecticide spraying, the household incidence of infection with Trypanosoma cruzi in children was positively related to the domestic abundance of infected T. infestans and the presence or proportion of infected dogs or cats in Amamá, a rural village in northwestern Argentina. Seven (12.1%) children seronegative for antibodies to T. cruzi at baseline, with no history of travel or blood transfusion, seroconverted after three years. Six incident cases lived in houses heavily infested with T. infestans, with high proportions of bugs infected with T. cruzi and having fed on humans or dogs. The remaining incident case occurred under a very light domestic infestation detected only at the endpoint, and most bugs had fed on humans. Dogs had a 17 times greater force of infection than children (4.3% per year). Sustained vector surveillance is crucially needed in high-risk areas for Chagas disease such as the Gran Chaco.