Distribution of the population by sex and age. 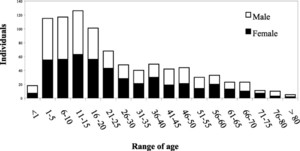 The frequency of Entamoeba histolytica and Entamoeba dispar infection was analyzed in a rural community in the state of Morelos, Mexico, using polymerase chain reaction (PCR). Sociodemographic variables as risk factors for the infection were assessed. Results highlighted the number of individuals with intestinal parasites (43.1%) in the community, indicating extensive fecalism. A high frequency of E. histolytica asymptomatic infection, higher than E. dispar infection (13.8% versus 9.6%), was detected by PCR. Anti-amebic antibody levels (IgG) in serum and saliva (IgA) samples were not associated with E. histolytica intestinal infection. These findings suggest a predominant distribution of E. histolytica strains of low invasive potential in this community.