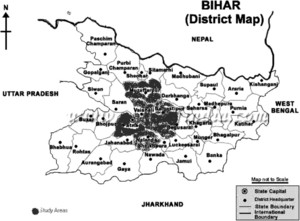 A case-control study was conducted to understand the risk factors associated with kala-azar in disease-endemic areas of Bihar, India. A total of 134 kala-azar cases treated at the Rajendra Memorial Research Institute of Medical Sciences in Patna and 406 healthy controls selected randomly from the neighborhoods of cases in their native villages were included in the study. Univariate analysis showed that education, a history of other diseases in the previous year, a history of kala-azar in the family, type of walls in houses, presence of a granary inside houses, presence of vegetation around houses, bamboo trees near houses, and irregular spraying around houses with DDT were risk factors. Multivariate analysis showed that a history of other diseases in the previous year (odds ratio [OR] = 3.6, P = 0.002), a history of kala-azar in the family (OR = 1.8, P = 0.03), mud-plastered walls in houses, (OR = 2.4, P = 0.0001], a granary inside houses (OR = 4.3, P = 0.0001), presence of bamboo trees around houses (OR = 2.3, P = 0.001), and houses not sprayed with DDT in the past six months (OR = 3.4, P = 0.0001) were significant risk factors for kala-azar. These results will be useful in developing kala-azar control programs for identifying intervention strategies such as better housing, regular and proper insecticide spraying, and promoting health awareness to the community residing in disease-endemic areas for reducing transmission and incidence of this disease.