Magnitude and breadth of the T-cell response against individual HCV antigens was measured in PBMCs from HR and LR subjects by IFN-γ ELISPOT assay. Individual HR and LR subjects are indicated on the horizontal axis. Each bar represents the number of IFN-γ secreting cells (ISCs)/106 PBMCs in the vertical axis, in response to peptide pools corresponding to Core, NS3 protease (NS3p), NS3 helicase (NS3h), NS4, NS5a, NS5bI, and NS5bII proteins. Only positive responses, as determined by the criteria described in the “Materials and Methods” section, are displayed.

Intracellular staining (ICS) for IFN-γ in HCV high-risk donor. T-cell responses against overlapping NS3p and NS5bII pooled peptides were measured in PBMCs from HR P46. PBMCs were stimulated with peptide pools at a concentration of 5 μg/mL per peptide for a total of 6 hours in the presence of Brefeldin A (10 μg/mL). The cells were then harvested for flow cytometric analysis, and 100,000 events were acquired on a FacsCalibur flow cytometer (BD Pharmingen). Data were analyzed using FlowJo software (Tree Star Inc.). The cells were gated on lymphocytes using side and forward light scatter profiles (not shown), then on CD4+. The figure shows the synthesis of IFN-γ versus CD4 expression in the presence of NS3p (A) or NS5bII (B). The cutoff value was calculated as described in “Materials and Methods.” 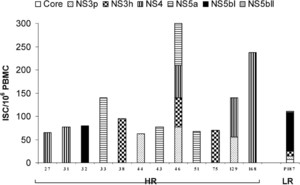 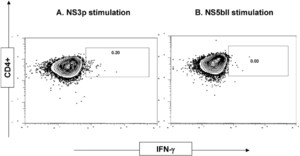 Sporadic cases of cell-mediated immunity (CMI) in persons exposed to hepatitis C (HCV) but evidently uninfected have been reported. To further define this, we measured CMI in individuals without evidence of HCV infection, that is, negative for HCV-antibodies (anti-HCV) and RNA, residing in a rural Egyptian community where prevalence of anti-HCV was 24%. Cell-mediated immunity (CMI) measured by interferon-gamma (IFN-γ) enzyme-linked immunospot (ELISPOT) assay, confirmed by intracellular staining using flow cytometry, against HCV peptides was measured in seronegative individuals with high-risk (HR) and low-risk (LR) exposures to HCV. Thirteen of 71 (18.3%) HR subjects but only 1 of 35 (2.9%) LR subjects had detectable CMI (P = 0.032). These data are compatible with the hypothesis that exposures to HCV may lead to development of HCV-specific CMI without anti-HCV and ongoing viral replication. We speculate induced CMI clears HCV sometimes when anti-HCV is not detectable, and HCV-specific CMI is a useful surrogate marker for exposure to HCV.