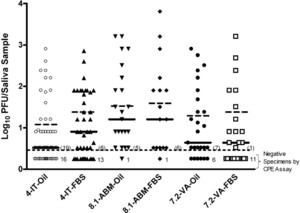 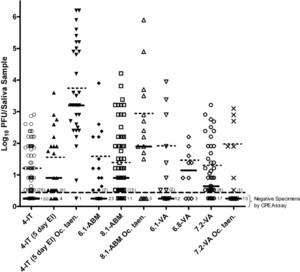 Determining the dose of an arbovirus transmitted by a mosquito is important to design transmission and pathogenesis studies simulating natural infection. Several different artificial infection and transmission methods used to assess vector competence and to estimate the dose injected during mosquito feeding have not been fully evaluated to determine whether they accurately reflect natural transmission. Additionally, it is not known whether different mosquito vectors transmit similar amounts of a given virus. Therefore, we compared three traditional artificial transmission methods using Venezuelan equine encephalitis virus (VEEV) and Aedes albopictus and Ochlerotatus taeniorhynchus mosquitoes. Both the mosquito species and the infection route used affected the amount of virus detected in the saliva after a 10-day extrinsic incubation period. Median titers of virus detected in saliva of Ae. albopictus and Oc. taeniorhynchus mosquitoes ranged from 0.2 to 1.1 log10 (mean 0.7–1.4 log10) and 0.2 to 3.2 log10 (mean 1.0–3.6 log10) plaque-forming units, respectively. The results of this study will aid in the design of transmission and pathogenesis studies involving arboviruses.