Blood smear of the patient showing a microgametocyte (black arrow) and a microgamete (white arrow). A cell nucleus (dark, thickened area) is visible in the microgamete (Giemsa stained, original magnification × 1,000). This figure appears in color at www.ajtmh.org.

Blood smear of the patient showing an exflagellating microgametocyte (Giemsa stained, original magnification × 1,000). This figure appears in color at www.ajtmh.org. 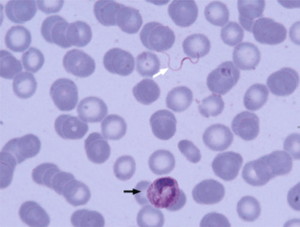 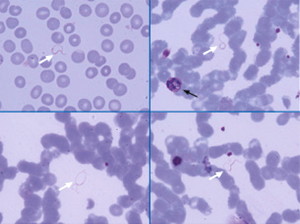 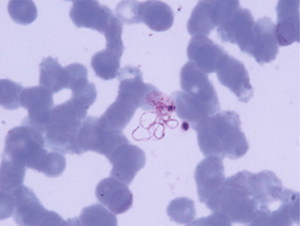 PSEUDO-BORRELIOSIS IN PATIENTS WITH MALARIA

Search for other papers by STEPHEN A. BERGER in
Current site
Google Scholar
PubMedClose
and
LIORA DAVID
LIORA DAVID

Malaria and relapsing fever are arthropod-borne infections characterized by fever, myalgia, headache, and a tendency to relapse. Both are diagnosed through examination of stained blood films, and both might respond to tetracycline therapy. In at least four published case reports, the presence of malarial microgametes possibly resulted in misdiagnosis of borreliosis in patients with malaria. An additional case is presented, and the mechanism of microgamete production in clinical specimens is discussed.

Both malaria and borreliosis are characterized by fever, rigors, headache, myalgia, hepatosplenomegaly and a tendency to relapse.1,2 Both diseases are acquired through the bites of arthropods, and are generally diagnosed through examination of peripheral blood smears. In recent years, a number of publications have described concurrent infection by Plasmodium vivax and Borrelia species, based upon possible misidentification of malarial microgametes as spirochetes.3–6

A 33-year-old woman was hospitalized with fever, rigors, and frontal headache of nine-days duration. Eighteen months prior to the onset of illness, she had returned from a tour through northern India. At the time, she did not take malaria prophylaxis. Since returning to Israel, the patient worked in a graphic design office in Tel Aviv. She had not been in areas known to be endemic for borreliosis, and had not been exposed to ticks or wild animals. The results of a physical examination were unremarkable. Her blood leukocyte count was 3,300/mm3, with 60% polymorphonuclear leukocytes, and her platelet count was 60,000/mm3. Blood cultures were negative.

The patient responded well to a course of chloroquine (2.5 grams over a three-day period), followed by oral primaquine (15 mg/day for 14 days). No antibiotics were administered, and she has remained well for three months.

Although tick-borne relapsing fever due to Borrelia persica is occasionally encountered among persons visiting caves or bunkers in Israel, our patient had not visited known disease-endemic areas. Autochthonous malaria has not been encountered in Israel for more than 50 years. The pathogeneses of these two illnesses are entirely independent, and borreliosis is not known to trigger a malarial relapse. Since our patient had acquired malaria 18 months prior to the onset of the present illness, concurrent relapsing fever could only be described as coincident.

Photomicrographs that accompanied prior reports of concurrent borreliosis and malaria depict dense, curved organisms that clearly contain bodies consistent with cell nuclei.3,4 In one report, the investigators contrast these characteristics with the thin, spiral, and faintly staining appearance of Borrelia.3 In at least two reports, the time and place of exposure were compatible with dual infection, but the spirochetes depicted were clearly microgametes.3,4

Standard laboratory charts for the diagnosis and speciation of malaria depict forms typically found in human blood: trophozoites, schizonts, and gametocytes. Protozoan forms found in the mosquito are not expected to appear in clinical specimens, and are rarely depicted. During the malarial life cycle, sexual forms (male and female gametocytes), which appear after several days of illness, are taken up by the mosquito. Within minutes, the male gametocyte fragments (ex-flagellates) into a number of microgametes, which are motile haploid cells reminiscent of spermatozoa (Figure 3). Microgametes could be misidentified as spirochetes; however, the latter are thin and poorly staining, and do not have a cell nucleus. Within the mosquito, microgametes seek out and combine with female structures (macrogametes), and ultimately develop into forms that are infective for the next human host.

Exflagellation of the microgametocyte appears to be triggered by an increase in pH following dissipation of carbon dioxide from blood taken up by the mosquito.7 As such, inoculation of blood into a test tube for laboratory processing appears to simulate the mosquito gut, and trigger the release of microgametes.

All relevant case reports found in a search of Medline (1965 through 2003) describe concurrent infection by Borrelia and Plasmodium vivax. The relative rarity of pseudo-borreliosis might reflect the fact that specimens obtained in disease-endemic countries generally consist of finger stick smears rather than blood collected in test tubes. The fact that three reports have originated in Israel is unexplained, but might represent an unidentified local factor in specimen processing, a relatively high incidence of imported malaria among tourists and immigrants, or publication bias related to the unusual number of journal articles submitted from this country.8

Patients presenting with malaria in more developed countries might be diagnosed and treated relatively early in the disease, obviating the period of time necessary for the development of microgametocytes. It is also likely that structures resembling spirochetes are often discounted as artifacts, or when misidentified as Borrelia would prompt administration of tetracyclines, agents that are effective against both malaria and relapsing fever.