Putative explanation for greater sensitivity of a rapid diagnostic test relying on detection of a persistent antigen (e.g., histidine-rich protein 2 [HRP2]) in a chronic Plasmodium falciparum infection compared with sensitivity of microscopy. The antigen persistence is modeled with a three-day half-life. Bands indicate the duration of parasite detection by microscopy (gray bars) and a rapid diagnostic test (RDT) (crosshatched bars and arrow). Although the initial threshold for detection by microscopy and RDT (dashed horizontal line) may be similar, the resultant cumulative effect on antigen concentration allows antigen detection while parasite density is below the threshold for microscopy. 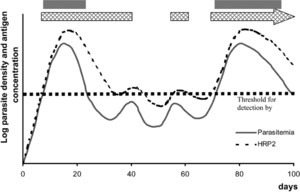 The persistence of parasite histidine-rich protein 2 (HRP2) in the circulation after parasite clearance has been considered a drawback for rapid diagnostic tests (RDTs) targeting HRP2 and a major cause of false-positive results. This paper reports results of a study into whether a proportion of RDT HRP2 false-positive cases carried parasites using polymerase chain reaction analysis as the gold standard rather than microscopy. The high rate of RDT false-positive parasitemia results in comparison with microscopy was shown to predominantly represent cases that had a parasite density below the threshold for detection by microscopy. Despite the generally low disease-endemic prevalence of malaria in the area, there was a high prevalence of chronic infections with low, fluctuating, parasite densities that were better detected by RDT. Our results suggest that in areas known to have low-density parasitemias, RDTs targeting HRP2 may increase diagnostic sensitivity in comparison with microscopy. While microscopy remains the standard for comparison of malaria diagnostic accuracy, the limitations of microscopy, and the possibility that RDTs may have superior accuracy in some circumstances, should be taken into account when interpreting results of diagnostic trials.