Sensitivity and reproducibility of the PCR. Standard deviation divided by the mean is plotted against the mean value. Each point is the mean of four replicates of one sample. The suggested cutoff point of 20 p/mL is marked on the graph. Below this point there is much higher variability in reported results.

The 18S real-time PCR results, showing clearly the sequestration pattern of parasites during a human malaria vaccine trial. Each line represents one volunteer. Flat lines across the bottom of the graph are protected volunteers with no parasites seen during the 21-day follow-up.

Vaccine efficacy, determined by delay to parasitemia. PCR positive results are from the first time point when a parasitaemia of > 1,000 p/mL is reached. A 22-day delay was used to include protected volunteers in the calculation. 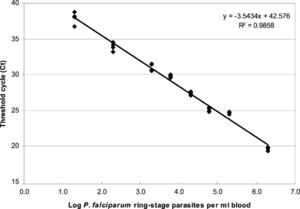 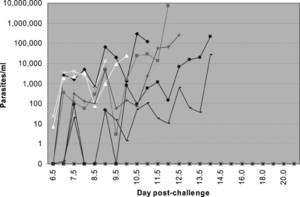 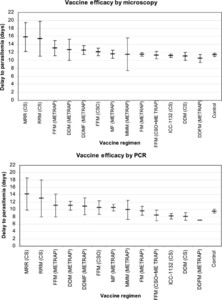 The demand for an effective malaria vaccine is high, with millions of people being affected by the disease every year. A large variety of potential vaccines are under investigation worldwide, and when tested in clinical trials, researchers need to extract as much data as possible from every vaccinated and control volunteer. The use of quantitative real-time polymerase chain reaction (PCR), carried out in real-time during the clinical trials of vaccines designed to act against the liver stage of the parasite’s life cycle, provides more information than the gold standard method of microscopy alone and increases both safety and accuracy. PCR can detect malaria parasites in the blood up to 5 days before experienced microscopists see parasites on blood films, with a sensitivity of 20 parasites/mL blood. This PCR method has so far been used to follow 137 vaccinee and control volunteers in Phase IIa trials in Oxford and on 220 volunteer samples during a Phase IIb field trial in The Gambia.