Course of Plasmodium falciparum parasitemia in 45 malaria patients treated with cotrimoxazole and classified in vivo as having an adequate clinical response or treatment failure. Error bars show the mean ± SEM. 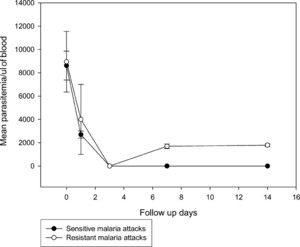 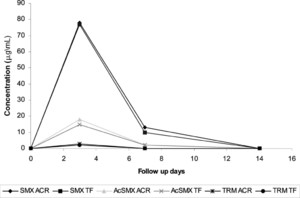 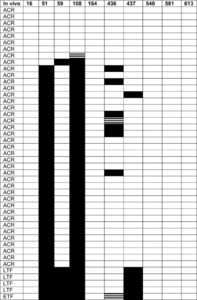 We assessed the efficacy of trimethoprim/sulfamethoxazole (TRM/SMX) in vivo in relation to the frequency of dihydrofolate reductase (dhfr) and dihydropteroate synthase (dhps) alleles in 45 Sudanese malaria patients. Plasma levels of TRM, SMX, and acetylsulfamethoxazole (AcSMX) were measured before treatment and at days 3, 7, and 14 or upon recrudescence to ascertain drug absorption. Forty patients (89%) had an adequate clinical response, one patient (2%) had an early treatment failure response, while four patients (8%) showed late treatment failure responses. Genotyping of merozoite surface protein 1, MSP-1, MSP-2, and glutamate-rich protein before treatment and upon recrudescence showed that all recurring parasites were recrudescences. The plasma levels of TRM, AcSMX, and SMX indicated adequate drug absorption in all patients. This suggests parasite resistance as a cause of treatment failure. The presence of dhfr Ile 51 and Asn 108 alone or coupled with dhps Ala-436 among parasites that were cleared after treatment indicates that these alleles alone are insufficient to cause in vivo resistance. However, the presence of the triple mutant dhfr (Ile-51/Arg-59/Asn-108) with the dhps Gly-437 genotype in all recurring infections, suggests the importance of codon 59 and 437 alleles in susceptibility to TRM/SMX. However, the number is too little to make firm conclusions.

Cotrimoxazole (combination of trimethoprim/sulfamethoxazole [TRM/SMX]) has been recommended as part of the standard treatment for people infected with human immunodeficiency virus (HIV) and those with acquired immunodeficiency syndrome, and in the integrated management of childhood illness in Africa.1 A similar antifolate combination, sulfadoxine-pyrimethamine, is now the first-line antimalarial drug in several African countries with the highest rates of HIV infections. Resistance to sulfadoxine-pyrimethamine is rapidly spreading and only a few alternative antimalarials are currently available in these countries. Resistance to SP has been associated with point mutations in the genes coding dihydrofolate reductase (dhfr) and dihydropteroate synthase (dhps). Cross-resistance between TRM and pyrimethamine has been shown at the molecular level,1 and components of TRM/SMX were found to select for dhfr and dhps mutants.2 This selection could accelerate development of Plasmodium falciparum resistance to SP where HIV and malaria are both highly prevalent. The effect of TRM/SMX therapy and prophylaxis on SP efficacy needs to be tested in clinical studies in Africa. Elucidation of amino acid residues in dhfr and dhps genes that are involved in TRM/SMX clinical failure could improve prediction of TRM/SMX resistance, help to develop treatment strategies, and choose the antifolate combinations with the least risk of selection for resistant parasite variants. The aim of the present study was to relate the inter-individual variability in TRM and SMX plasma concentrations and dhfr/dhps parasite genotypes that prevailed pre-therapy to TRM/SMX treatment outcome.

A controlled hospital-based clinical trial was conducted in an area of unstable malaria east of Khartoum, Sudan from November 96 to February 1997. The in vivo sensitivity testing was conducted and evaluated according to World Health Organization (WHO) guidelines.3 Forty-five patients (4–65 years of age, mean ± SD = 26.45 ± 14.56 years) with acute uncomplicated malaria and parasite burdens of 1,000–60,000 asexual parasites/μL of blood (mean ± 95% confidence interval = 6,220 ± 492.9), were treated with TRM/SMX tablets containing 100 mg of SMX and 20 mg of TRM (Sanavita, Werne, Germany). A dose of 20 mg of SMX/kg every 12 hours was given to adults and half of this was given to children for five days. All treatments were supervised. Clinical and parasitologic examinations were conducted every day in the first week and on day 14 or whenever patients had a headache, fever, or any other malaria symptom. Six milliliters of venous blood were obtained from each patient before treatment and at days 3, 7, and 14, or upon recrudescence for plasma drug measurements and for the determination of dhfr, dhps, merozoite surface protein 1 (MSP-1), MSP-2, and glutamate-rich protein (GLURP) genotypes.

DNA was isolated from heparinized blood samples by extraction with phenol-chloroform as described by Khalil and others.4 A nested polymerase chain reaction (PCR) and restriction fragment length polymorphism (RFLP) analysis were conducted to detect point mutations in the dhfr and dhps genes as described by Khalil and others.4 The DNA from established laboratory strains were used as controls for both the PCR and RFLP analysis.

A high-performance liquid chromatography method developed by Rønn and others6 was used to determine TRM, SMX, and acetylsulfamethoxazole (AcSMX) concentrations on days 0, 3, 7, 14, or upon recrudescence.

Of 45 patients, 6 were children less than 10 years of age (mean ± SD = 6.2 ± 0.3 years) and 39 were adults more than 18 years of age (mean ± SD = 25.3 ± 10.3). Cotimoxazole components were not detected in any of the patients before starting cotimoxazole therapy. Of 45 patients, 40 (89%) had an ACR (mean ± SD age = 25.4 ± 10.5 years), 1 patient (2%) had an ETF response, and 4 patients (9%) had LTF responses. All patients with treatment failure responses were children less than 10 years of age. Children less than 10 years of age had significantly higher treatment failure rates than subjects ≥ 18 years of age (relative risk = 2.99). No significant difference was seen in pre-treatment parasite density of patients with ACR or TF (P > 0.05) (Figure 1). Mean ± SD fever and parasite clearance times in patients with ACR were 2.3 ± 0.9 and 2.9 ± 1.0 days, respectively. Full compliance, as indicated by adequate plasma concentrations of all cotrimoxazole components (TRM, SMX, and AcSMX), was seen in all patients. No significant differences were observed in plasma drug levels of patients with ACR or TF (P = 0.1) on all days post-therapy (Figure 2). Genotyping of MSP-1, MSP-2, and GLURP showed that the five patients with treatment failure were due to recrudescence of resistant parasites; four isolates were identical at all three loci on days 0, 3, and 7 and upon recrudescence and in the fifth patient (with an LTF response). Two parasite lines were detected on days 0, 3, and 7, and by day 14 only one of these and an additional new isolate appeared. Thus, it was concluded that the new isolate from this patient was a recrudescence. Thus, the cause of treatment failure in this study is due to recrudescence of genetically resistant parasites. Genotyping of dhfr and dhps was conducted to identify the alleles that might be involved in resistance to TRM/SMX.

In this study, cotrimoxazole cleared parasites in 89% of the patients. Treatment failure occurred in 11% of the patients. The parasite and fever clearance times indicate that cotrimoxazole is as effective as sulfadoxine-pyrimethamine in the treatment of acute symptomatic uncomplicated P. falciparum malaria in the study area.4 It has an added advantage when malaria coexists with respiratory tract infections for which cotrimoxazole is the recommended drug. Children less than 10 years of age had significantly higher treatment failure rates than subjects ≥ 18 years of age (relative risk = 2.49), suggesting that acquired immunity influenced treatment outcomes in the presence of parasite drug resistance.7

Genotyping of MSP-1, MSP-2, and GLURP showed that all recurring parasites were recrudescences. It is difficult to draw a firm conclusion on the role of dhfr and dhps genotypes in response to cotrimoxazole therapy in this study because only a few resistant cases were reported. However, the presence of the triple mutant dhfr (Ile-51/Arg-59/Asn-108) coupled dhps Gly-437 genotypes before treatment and in all recurring infections suggests the importance of these alleles in susceptibility to TRM/SMX. The high prevalence of dhfr 51 Ile and 108 Asn mutations alone (80%), or with the dhps 436 Ala mutation in eight of the pre-treatment samples in the sensitive group suggests the insufficiency of these mutations to bring about cotrimoxazole treatment failure. The presence of the Arg-59 mutation in all recurring infections might reflect the importance of this allele in determining TRM/SMX efficacy. A previous study has shown that the Arg-59 mutation introduces a positive charge at the side chain terminus of Arg.8 This mutation enhanced substrate (dihydrofolate) binding activity and higher turnover. Higher affinity of the enzyme might increase resistance because the drug would be less able to compete with the substrate. In this study, the prevalence of pre-treatment parasite isolates with double mutations in dhfr was high (80%, Figure 1), and more frequent than those with mutant dhps genes (24%). This is in agreement with the previous studies from the Middle East, where the transmission rate is low, chloroquine resistance is recent, and use of sulfadoxine-pyrimethamine is limited.9

Previous studies have demonstrated an association between use of sulfadoxine-pyrimethamine and the frequency of dhfr-and dhps- resistant phenotypes.10 In the study area, chloroquine and quinine are the most commonly used antimalarials for home-based treatment and the use of PYR/SDX is limited.4 It is therefore possible that these mutant variants may have arisen not from selection by sulfadoxine-pyrimethamine, but by the use of TRM/SMX, which is commonly used to treat acute respiratory infections, dysentery, and diarrhea in the study area (Satti GMH, unpublished data). The absence of TRM/SMX components in all pre-treatment plasma samples is not necessarily due to the absence of the drug in the area, but because of its rapid elimination from the body. This rapid elimination is documented in our study by the absence of TRM, SMX, and AcSMX in the plasma of 45% of the study patients seven days post-cotrimoxazole standard therapy.

In this limited controlled study, cotrimoxazole was found to be efficacious in the treatment of acute uncomplicated P. falciparum malaria. However; high rates of clinical failure were reported from some regions of east Africa, and the investigators recommended that cotrimoxazole should not be used for combined treatment of malaria and pneumonia in the region.11 The components of cotrimoxazole have short half-lives12 and thus fit well with the perceived need for such agents for malaria treatment to avoid prolong persistence and selection of drug resistance in new infections. However, the lengthy dosage of the drug under routine conditions could lead to accidental or intentional under-dosing. Taking into consideration the short period of activity of cotrimoxazole and its low parasite reduction ratios, failure to comply with the full duration of treatment can produce inadequate blood/plasma concentrations for treating or preventing malaria infection. The use of antifolate combinations with single-dose regimens and short half-lives, which are less likely to select for resistance, might offer a strategy to limit the development of drug resistance and lengthen the life span of the antifolates in the study area. A high-dose, four tablets of TRM/SMX twice a day for two days, which was shown to be as effective as a five-day regimen of TRM/SMX,13 should be investigated in the study area to ensure more rapid action and better compliance.