Stochastic simulations of a SARS outbreak with dependency on the coverage and protective effect of precautionary behaviors. a, Predicted number of symptomatic cases and corresponding 95% confidence interval (95% CI) given by 250 simulation runs assuming unchanged (stable) protective behaviors for the entire period. The reproduction number (R) was 4.1 ± 1.1. b, Sensitivity of the cumulative number of cases at Day 30 to the coverage of masks. The obtained line represents the simulation based on mean field (without assuming random function with binomial distribution in each transition probability). The protective effect of wearing a mask was fixed (β = 0.6). c and d, Stochastic simulations of a SARS outbreak with dependency on a combination of precautionary measures and strict isolation. c, The mean number of incubating individuals and corresponding 95% CI from 250 runs with changes in protective behaviors combined with strict isolation (lower 95% CI is x-axis). At Day 7, the effectiveness/coverage of precautionary measures used improved from 0.6/52.0 to 0.9/89.2, respectively. At Day 13, the number of susceptible individuals decreased from 300 to 20. The reproduction number decreased from 4.1–0.7 ± 1.1–0.8. d, The mean ± 95% CI of symptomatic cases given by 250 runs assuming changes in protective behaviors combined with strict isolation. The conditions were the same as those in c. e, Sensitivity of the size of an outbreak (represented by the cumulative number of cases) to the time taken to enhance precautionary measures and implement strict isolation; the combined measures are started at the same time and under the same conditions as in c. 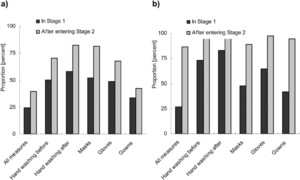 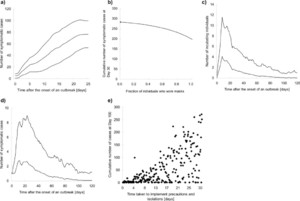 A case-control study was conducted to examine the relationship between severe acute respiratory syndrome (SARS) and the time-dependent precautionary behaviors taken during an outbreak of SARS in Hanoi French Hospital (HFH), Vietnam. Masks (odds ratio [OR] = 0.3; 95% confidence interval [CI]: 0.1, 0.7) and gowns (OR = 0.2; 95% CI: 0.0, 0.8) appeared to prevent SARS transmission. The proportion of doctors and nurses who undertook each measure significantly improved (χ2 = 9.8551, P = 0.043) after the onset of secondary cases. The impact of individual behaviors on an outbreak was investigated through mathematical approaches. The reproduction number decreased from 4.1 to 0.7 after notification. The basic reproduction number was estimated, and the use of masks alone was shown to be insufficient in containing an epidemic. Intuitive results obtained by means of stochastic individual-based simulations showed that rapid improvements in behavior and isolation would increase the probability of extinction.