Cumulative survival rates as a percentage of each study group by parasitologic failure.

Cumulative survival rates as a percentage of each study group by clinical failure. 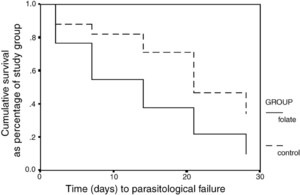 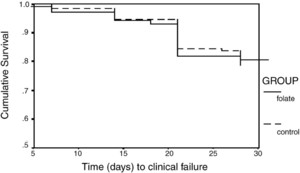 Malaria and anemia are common conditions in patients presenting to outpatient clinics in Kenya. Anemia is usually due to malaria infection with underlying micronutrient deficiency. Iron therapy has been shown to enhance recovery from anemia in children with malaria, without affecting malaria treatment. Iron and folic acid are often prescribed together for anemic individuals. Until recently in Kenya, the drug of first choice for non-severe malaria was sulfadoxine-pyrimethamine (SP), an antifolate antimalarial drug. In this study, 303 patients of all ages with anemia and uncomplicated Plasmodium falciparum malaria attending an outpatient clinic in an area of seasonal malaria were treated with SP and iron, and were randomized to receive folic acid. Parasite clearance rates were measured using a survival analysis plot for both parasitologic and clinical failure. There was a significant reduction in the efficacy of SP in patients taking standard therapeutic doses of folic acid using the survival curve for parasitologic failure (P < 0.0001), but no difference for clinical failure (P = 0.7008). Folic acid supplementation did not enhance recovery from anemia.