Malaria cases by month, enrolled via passive and active surveillance by the public health system (see the “Materials and Methods” section for more details).

Triangle plot of the odds ratios for sleeping under impregnated net, unimpregnated net, or no net, as risk factors for malaria. Each axis shows one of the mutually dependent odds ratios (from Table 3), with the + symbol indicating their joint effects and the univariate confidence interval in bold. Each odds ratio is the ratio of the other two, so a point defined by any of the two axes can be read off on the third. The ellipsoid is the joint 95% confidence region, centered on the point estimate. The * symbol indicates the summary odds ratios from Lengeler’s systematic review. 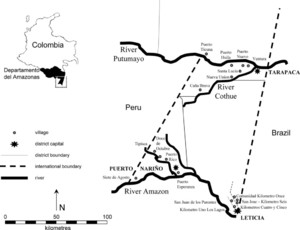 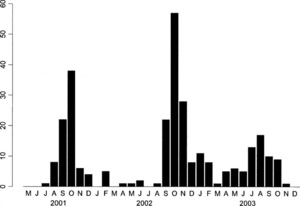 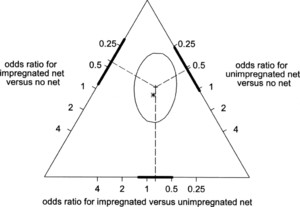 The degree of effectiveness of mosquito nets against malaria in the Americas has remained uncertain. We carried out a case-control study of net use and mild malaria in the Amazonas state of Colombia. Two hundred ninety cases were enrolled via the Health Department services, and 977 community-based controls matched for age, sex, and place of residence. We found that a large proportion of the population (96% of controls) slept under nets. Nevertheless, we found a benefit of impregnated nets compared with no net use: adjusted odds ratio (OR) for mild malaria 0.44, 95% confidence interval (CI) 0.20–0.98. Nonimpregnated nets had a benefit that was only slightly smaller but not statistically significant (OR for mild malaria 0.54, 95% CI 0.25–1.18). Travel in the previous month had an odds ratio of 6.2 (95% CI 3.1–8.8) and a population attributable fraction of 13% compared with 11% for failure to use an impregnated net. We conclude that, in the Amazon region, promotion of mosquito net use and impregnation is justified, and that there is a need for measures to protect travelers from malaria.