Map of the Nile River and the Delta: (•) indicates sampling localities in which Biomphalaria snails were found. Note that because of their proximity, some of the collection localities fall under the same dots in the figure (see Table 2 for more details). 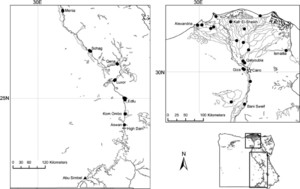 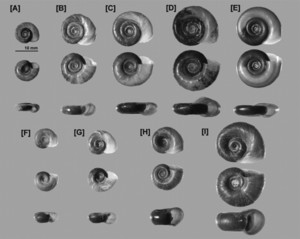 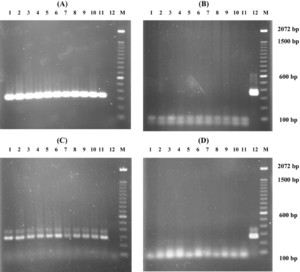 A MOLECULAR SURVEY OF BIOMPHALARIA IN EGYPT: IS B. GLABRATA PRESENT?

Two species of Biomphalaria are reported from Egypt, the indigenous Biomphalaria alexandrina and Biomphalaria glabrata, the latter believed to be introduced during the past few decades. Both are known to be excellent hosts of Schistosoma mansoni, the human-infecting blood fluke common in Egypt. Given the concerns regarding the spread of the exotic B. glabrata, this study was carried out to get a more current picture of the status of Biomphalaria in Egypt. Snail collections were undertaken during 2002–2003 from regions between Alexandria and Ismailia in the north of the Nile Delta, to as far south as Abu Simbel at Lake Nasser. Biomphalaria snails were found in 37 out of 76 sampled localities and were widely distributed in the Nile Delta and along the Nile as far south as Aswan. According to the results of species-specific polymerase chain reaction assays that sampled both nuclear and mitochondrial genomes, and according to DNA sequence data, all Biomphalaria collected during this survey were B. alexandrina. There was no evidence of the presence of B. glabrata or of hybridization of B. alexandrina with B. glabrata in the examined sites. The results were surprising given that some field-collected snails strongly resembled B. glabrata in both size and conchology and that previous survey work suggested B. glabrata had established in Egypt. Continued scrutiny to ascertain the possible presence of B. glabrata in Egypt is warranted. Also, the planorbid Helisoma duryi was detected in the Delta and as far south as Aswan, so it is important for Egyptian schistosomiasis workers to accurately distinguish this non-schistosome-transmitting snail from Biomphalaria.