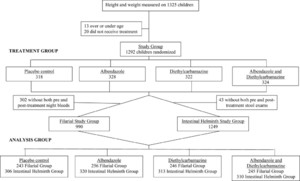 This randomized, placebo-controlled trial investigated the tolerance, efficacy, and nutritional benefit of combining chemotherapeutic treatment of intestinal helminths and lymphatic filariasis. Children were infected with Ascaris (30.7%), Trichuris (53.4%), and hookworm (9.7%) with 69.9% having more than one of these parasites. A total of 15.8% of the children had Wuchereria bancrofti microfilariae. Children were randomly assigned treatment with placebo, albendazole (ALB), diethylcarbamazine (DEC), or combined therapy. The combination of DEC/ALB reduced microfilarial density compared with placebo, ALB, or DEC (P ≤ 0.03). Albendazole and DEC/ALB reduced the prevalence of Ascaris, Trichuris, and hookworm more than placebo or DEC (P ≤ 0.03). Among Trichuris-infected children, those receiving ALB and DEC/ALB demonstrated greater gains in weight compared with placebo (P ≤ 0.05). Albendazole and DEC/ALB were equally efficacious in treating intestinal helminths and for children with W. bancrofti microfilaremia, DEC/ALB was more effective than DEC, with no increase in severity of adverse reactions.