Everglades virus transmission cycle. Arrows indicate cycling of Everglades virus via mosquito vectors and vertebrate reservoir hosts. Organisms with an established role in the cycle are highlighted in bold; those species postulated to participate are shown in normal type. 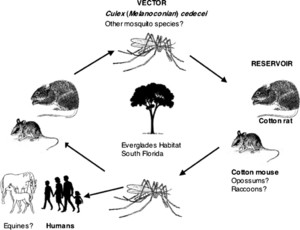 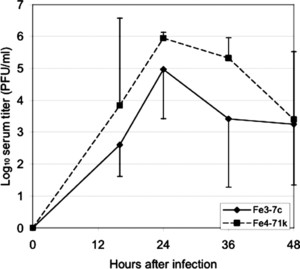 SUSCEPTIBILITY OF OCHLEROTATUS TAENIORHYNCHUS AND CULEX NIGRIPALPUS FOR EVERGLADES VIRUS

Everglades virus (EVEV), an alphavirus in the Venezuelan equine encephalitis (VEE) complex, is a mosquito-borne human pathogen endemic to South Florida. Field isolations of EVEV from Culex (Melanoconion) cedecei and laboratory susceptibility experiments established this species as its primary vector. However, isolates of EVEV from Ochlerotatus taeniorhynchus and Culex nigripalpus, more abundant and widespread species in South Florida, suggested that they also transmit EVEV and could infect many people. We performed susceptibility experiments with F1 generation Oc. taeniorhynchus and Cx. nigripalpus to evaluate their permissiveness to EVEV infection. In contrast to the high degree of susceptibility of Cx. (Mel.) cedecei, Oc. taeniorhynchus and Cx. nigripalpus were relatively refractory to oral EVEV infection, indicating that they are probably not important vectors. Identification of vectors involved in enzootic EVEV transmission will assist in understanding potential changes in vector use that could accompany the emergence of epizootic or epidemic EVEV.