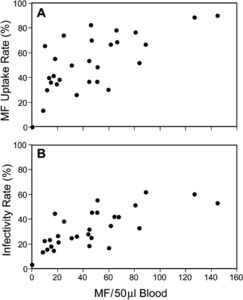 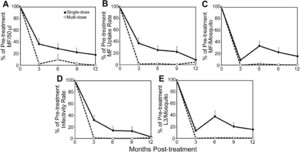 EFFECTS OF COMBINED DIETHYLCARBAMAZINE AND ALBENDAZOLE TREATMENT OF BANCROFTIAN FILARIASIS ON PARASITE UPTAKE AND DEVELOPMENT IN CULEX PIPIENS L.

We studied effects of combined diethylcarbamazine (DEC) and albendazole (ALB) treatment on Wuchereria bancrofti microfilaria (MF) uptake and development of infective larvae (L3) in Culex pipiens. Consenting Egyptian adults with microfilaremia (MF > 300/mL) were treated with one or seven daily doses of DEC/ALB. Laboratory-reared mosquitoes were fed on subjects before and after treatment. MF uptake and infectivity (assessed by mosquito dissection) were reduced by 89.6% and 82.9%, respectively, 12 months after single-dose treatment and by 96.2% and 99.7%, respectively, after multi-dose treatment. The L3:mosquito ratio decreased by 88% to 0.082 after single-dose treatment and by 99.8% to 0.001 after multi-dose treatment. If high coverage rates can be achieved for several annual cycles, mass drug administration (MDA) with DEC/ALB has the potential to decrease transmission to unsustainable levels and eliminate filariasis in populations. Multi-dose MDA (especially in the first year) might interrupt transmission with fewer cycles than single-dose treatment.