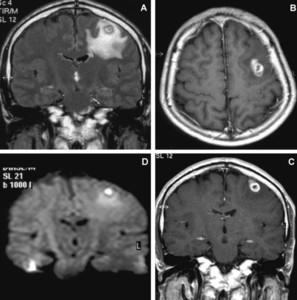 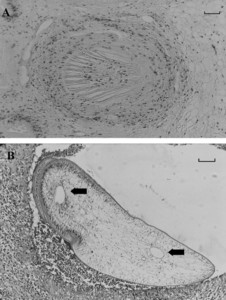 A 38-year-old man living near Phnom Penh (Cambodia) was admitted to a hospital in Paris in June 2001 for a single episode of a generalized grand mal seizure. This episode was preceded by a 9-month history of headaches. Magnetic resonance imaging (MRI) of the head revealed a rounded lesion immediately ahead of the left central sulcus. The resected lesion was about 20 mm in diameter. Histologic examination revealed an elongated but unsegmented metacestode at the center of the lesion. Polymerase chain reaction (PCR) analysis was inconclusive due to formalin-based histologic processing of the tissue. Morphologic analysis based on the histologic sections revealed that the metacestode was a tetra-acetabulate plerocercoid of the order Cyclophyllidea, with a distinct rostellum and pseudosegmentation of the dorsoventrally flattened hindbody. This is the first report of a tetra-acetabulate plerocercoid from a human host and the first report of any cyclophyllidean plerocercoid from the human brain. After 6 weeks, the patient was asymptomatic, neurologic examination was normal, and the brain MRI showed only surgical cavitation. The patient returned to Cambodia.

Cestodes (phylum Platyhelminthes: class Cestoda), usually referred to as tapeworms, are obligate heteroxenous parasites. Adult tapeworms are almost exclusively parasites of the digestive tract of members of all vertebrate classes, whereas the immature stages (known variously as larvae or metacestodes) develop in various tissues of vertebrates and/or in invertebrate organisms such as arthropods.

Humans can be naturally or accidentally infected either by adult or larval cestodes, all originating from the orders Cyclophyllidea and Pseudophyllidea, out of 14 orders currently recognized in the subclass Eucestoda.1 Parasitism by adult tapeworms results in a generally benign syndrome referred to variously as taeniasis, hymenolepiasis, dipylidiasis, diphyllobothriasis, and so forth, depending on the genus of the parasite. On the contrary, tissue-dwelling metacestodes often induce marked morbidity and mortality that constitute major economic and public health concerns.

The complexity of the terminology applied to larval cestodes (considered synonymous with metacestodes in this report) has been long lamented by specialists in this topic. A revised terminology has been proposed recently in an attempt at rationalization and clarification and in which six basic types of metacestodes are identified.2 Accordingly, cestode larvae known to infect humans can be regrouped in three main types. Metacestodes of the order Pseudophyllidea such as Sparganum and Spirometra (sparganosis) are of the plerocercoid type (primary lacuna lacking, scolex everted). By contrast, the various cyclophyllidean larvae that are most frequently encountered in humans are primary lacunate larvae of two types: the cysticercoid (primary lacuna present, scolex retracted), for the family Hymenolepididae (hymenolepiasis), and the cysticercus (primary lacuna present, scolex invaginated), for the family Taeniidae, with its various mono- or polycephalic derivatives (cysticercosis, coenurosis, and hydatidosis).

Apart from the above-mentioned fully developed metacestodes, humans can be infected in exceptional cases by proliferating larvae of various types. This can occur under normal conditions as part of the cestode life cycle that is characterized by the formation of similar cephalic (fertile) larvae, such as for members of the Pseudophyllidea or for cysticercus metacestodes of Taenia crassiceps. By contrast, both members of the Pseudophyllidea and the Cyclophyllidea can undergo abnormal proliferation in certain unusual conditions, with production of dissimilar acephalic (sterile) larvae. Examples of such abnormal proliferating larvae in humans are the racemose type of cysticercus, undifferentiated hymenolepidid larvae, or Echinococcus multilocularis hydatid cysts for the Cylophyllidea, and the proliferating larva referred to as Sparganum proliferum for the Pseudophyllidea.3–6

In the current report, we describe for the first time a case of human infection of the brain with a fully developed cyclophyllidean metacestode of the plerocercoid type.

A 38-year-old man living in the suburbs of Phnom Penh (Cambodia) was admitted in June 2001 to the neurology ward of the Foundation Rothschild (Paris, France) for a single episode of a generalized grand mal seizure. This episode was preceded only by a 9-month history of headaches, apart from a profound scalp wound that occurred in Cambodia 1 year before. On admission, no local infection was noted. The temperature was 37.1°C. Neurologic and general examination were normal.

Magnetic resonance imaging (MRI) of the head revealed a rounded lesion immediately ahead of the left central sulcus. The lesion showed increased diffusion signal and dramatic enhancement with use of gadolinium (Figure 1). Chest roentgenogram was normal.

The leukocyte count was 6,800/mm3 with 66% neutrophils, 25% lymphocytes, 8% monocytes, and 1% eosinophils. Cerebrospinal fluid analysis showed 390 mg/dL of protein and 630 mg/dL of glucose (35 mmol/L), with no cell. Bacterial and fungal cultures were negative.

The lesion was presumed to be of infectious origin, and radical total resection was performed.

The resected lesion was about 20 mm in diameter. Histologic examination of the sections showed a voluminous polycyclic inflammatory granuloma with large abscessed necrotic areas (Figure 2A). The granuloma was well delimited from the surrounding cerebral tissue in which an important perivascular glial reaction was visible. A significant fibrosis was noted at the periphery of the lesion with numerous capillaries and nodular infiltrates comprising lymphocytes, plasma cells, and some polymorphonuclears without evidence of eosinophils. An elongated but unsegmented metacestode was present at the center of the lesion.

Repeated direct and nested–polymerase chain reaction (PCR) assays using various primers were made on the genomic DNA extracted from deparaffinized sections in an attempt to amplify the worm SSU ribosomal DNA.7 However, no relevant amplification product could be obtained, owing probably to alteration of the worm DNA after formalin fixation and paraffin embedding and to the relative scarcity of tapeworm genomic sequences currently available in data banks, which are largely limited to species of medical or economic importance.8

In the absence of well-defined diagnosis, the patient was treated for tuberculosis. This treatment was stopped 3 days later when histologic examination showed the absence of tuberculoid granulomas, and the patient received only anticonvulsive therapy (valproate, 1,000 mg per day). No anthelmintic treatment was given. After 6 weeks, the patient was asymptomatic, neurologic examination was normal, and the brain MRI showed only surgical cavitation. The patient returned to Cambodia.

DESCRIPTION OF THE WORM

The surgical specimen was subsequently exhaustively sectioned for histologic examination. An anterior longitudinal and a posterior transverse section of the worm were present about 5 mm apart (Figure 2A). The metacestode appeared as a well-conserved solid-bodied larva with no visible lacuna or bladder-like structure. The anterior part (3–8 mm × 0.9 mm) consisted in an acetabulate-type scolex with four prominent suckers (250–275 × 175–250 μm) (Figure 2B). A distinct rostellum was present without apparent hooks (i.e., unarmed) (Figure 3A). However, numerous longitudinal gaps regularly spaced around the rostellum’s periphery may represent tegumental pockets from which the hooks were lost during histologic preparation. The body was clearly separated by two well-defined outer transverse and inner longitudinal muscular fiber layers. In the transverse sections at distance from the holdfast, the posterior extremity appeared to be dorsoventrally flattened (1.2 × 0.35 mm) and possessed 2 pairs of lateral excretory canals arranged dorsoventrally. The body showed no evidence of proglottidation, but serial sectioning did reveal transverse folding characteristic of the diagnostic condition of pseudosegmentation (Figure 3B).

Attempts in sequencing the worm 18S rDNA, which could have provided key elements for identification of the worm, were unfortunately unsuccessful. This was most probably due at least in part to DNA alteration during formalin fixation, thus the need to use now ethanol fixation in clinical settings must be emphasized. Therefore, the diagnosis can be based only on morphologic characters. In the current case, the metacestode was solid bodied, 0.9–1.2 mm wide by about 1.5 cm long with an everted scolex (i.e., of the plerocercoid type). In humans, this type of larva has been observed only in sparganosis, which is due to infection by pseudophyllidean cestodes. However, in the current case the tetra-acetabulate scolex (i.e., with four prominent suckers) and the structure of the musculature were diagnostic characters of Cyclophyllidea, clearly excluding a sparganum.9 Nevertheless, the cyclophyllidean larvae known to infect humans are all vesicular metacestodes of the cysticercoid (hymenolepidid) or cysticercus (taeniid) type. By contrast, no vesicular structure was observed in the current case despite careful analysis of numerous serial sections. This, in addition to the everted scolex, allowed to rule out definitely the possibility of a cerebral cysticercosis in particular, which is common in Asian countries. Therefore, several other diagnostic possibilities are to be considered.

One possibililty is the tetrathyridium metacestode of Mesocestoides sp. (family Mesocestoididae), which is generally considered as part of the Cyclophyllidea.10,11 Human infections with adult Mesocestoides tapeworms are extremely rare.12 Naturally acquired infections with presumed Mesocestoides larvae recovered from the pleura or lungs have been described in non-human primates.13–15 In humans, no case of larval infection with Mesocestoides has been reported. Marty and Neafie observed a case of brain infection with a solid-bodied cestode larva presenting similarities with the current case.16 The worm was found in a biopsy of an abscessed lesion of the cerebral cortex in a Filipino woman who presented with convulsions. A transverse section of the larval body showing morphologic characteristics of Cyclophyllidea was observed, but no scolex was present. The parasite in the current case differed from typical Mesocestoides, as it contained a distinct rostellum that is not characteristic of this genus.

A second possibility is that this may be an armatetrathyridium of a true taeniid species, such as Taenia polyacantha (= Tetratirotaenia polyacantha).11 However, although the basic morphology is similar, the absence of any sign of asexual proliferation in the current case contrasts with the usual behavior of T. polyacantha. Furthermore, the location in the brain, and the human as a host, would be unusual for this species.

A third possibility is Cladotaenia globifera, which was once regarded as a taeniid but is now generally considered to be a member of the family Paruterinidae.17 The metacestode of Cladotaenia is regarded as a special form that should be designated as cladothyridium.2 Morphologically, however, this species typically has a small but armed rostellum, with two rows of hooks. As with the other possibilities mentioned above, this species would be unexpected in the brain of a human, as the metacestode normally infects rodents, but it may have happened in this case due to unusual zoonotic circumstances.

A fourth possibility is that this might be a strobilocercus metacestode. This metacestode form is an elongated pseudosegmented cysticercus of a species such as Taenia taeniaeformis but with the bladder region missing from the worm or from the sections. Also, strobilocerci possess an armed rostellum similar in appearance to the current case. Strobilocerci normally occur in the liver and lungs of rodents, so this would be unusual in the brain and from a human. Nevertheless, the morphology in this case is highly consistent with this taxonomic group.

None of these four possibilities can be ruled out on morphologic evidence alone. In any case, this is the first report of a tetra-acetabulate plerocercoid from a human host and the first report of any cyclophyllidean plerocercoid from the human brain. The previous absence of reports from humans, and the similarity of this metacestode to species occurring naturally in rodents or other non-human mammals, suggests that this is an accidental zoonotic infection.

In the current case, the mode of penetration of the parasite is unknown. It is likely that the parasite was acquired through accidental ingestion of an intermediate host, which is the mode of transmission for all of the species regarded as possibilities here.