Cutaneous migratory track in the patient.

Juvenile Fasciola removed from the skin of the patient and stained with acid carmine. 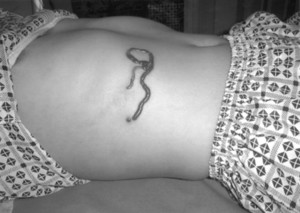 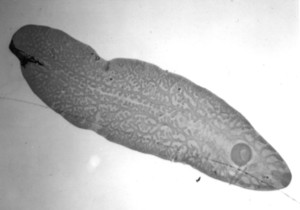 A 40 year-old woman living in Gialai, Kontum, Vietnam, developed a red solid mass in the epigastric region. From ultrasound investigation, liver abscess and myositis of the intercostal muscle was diagnosed. Two weeks after treatment with antibiotics, the mass disappeared, but a migratory track developed in the right upper quadrant of the abdomen. An aspiration of the vesicular end of the serpiginous track showed a light brown, living worm that was later identified as an immature Fasciola sp. This is the first case report of cutaneous fascioliasis in the form similar to creeping eruption.

Human fascioliasis has been reported worldwide. Infection is of two types, with hepatic and extrahepatic organ involvement. Ectopic infections were reported mainly in organs and subcutaneous tissues in the abdominal region. They were also found in lungs, heart, eyes, brain, and lymph nodes.1–6 The first two cases of human fascioliasis were reported in Vietnam in 1978. Subsequently, infection with large liver flukes was frequently found in humans. During the years 1997–2000, 500 cases were diagnosed based on clinical manifestations, computed tomographic images, serologic tests, and ultrasound evidence. Approximately two-thirds of the patients were female and 85% were 21–50 years old. The disease was distributed mainly in central Vietnam and the midland provinces. Almost all patients had hepatic symptoms.7 This paper reports a case of Fasciola infection with hepatic lesions and a cutaneous manifestation similar to that of larva migrans syndrome.

On June 24, 2000, a 40-year-old woman came to Medic Medical Center in Ho Chi Minh City with a burning pain at her right upper quadrant (RUQ) and a dark red serpentine track under the skin at the same site. She was working on a farm in Gialai Province, and had the habit of feeding cows, dogs and cats, and sometimes picking raw watercress. One month before, the patient had anorexia, asthenia, dizziness, and an epigastric pain that irradiated to the RUQ region, but no fever. After that, a solid red mass emerged at the epigastric region and moved up her right chest wall some days later. The mass was the size of a duck egg and painless. At the local health service, the patient underwent an ultrasound test and was diagnosed with liver abscess and myositis of the intercostal muscles. She was admitted to the local hospital on June 2, and prescribed an antibiotic (cefotoxin, a third-generation cephalosporin), steroids, an analgesic, and vitamins. After two weeks of treatment, the mass disappeared. However, some days later the patient noticed a small vesicle on the skin of the RUQ, at first the size of a peanut, but it then gradually became a serpentine, angulated, and vesicular track that was painful and burning. The track progressed in lengths of 3–4 cm every day. She felt a burning pain along this migratory track. Ultrasound findings on June 16, 2004 showed a poor echo structure of 31 × 52.3 mm at the left lobe of the liver, but no biliary duct dilatation or spleen enlargement. The diagnosis was a liver abscess, but did not exclude a fluke cyst. She decided to visit the Medic Medical Center in Ho Chi Minh City where she underwent an ultrasound examination of both the liver and skin lesion.

At the liver site, some small cysts measuring 73 × 51 mm were found, suggesting parasitic infection, and the skin lesions in the RUQ were echo-free, tubular structures surrounded by edematous subcutaneous tissue. She had a red blood cell count of 3,980,000/mm3 and a white blood cell count of 7,100/mm3 (76% neutrophils, 2% eosinophils, and 22% lymphocytes). On June 24, 2000, the patient was referred to the Department of Parasitology, Faculty of Medicine, at the University of Medicine and Pharmacy in Ho Chi Minh City.

On the skin at the RUQ, a dark red and serpentine tunnel-like track 23.6 cm long was seen. It was vesicular, and at one end the color turned darker (Figure 1). Aspiration collected a light red-brown fluid and the track was flattened; the covering skin was wrinkled and easily torn. After properly cleaning the lesion, a light-brown living Fasciola appeared at one end. The serpentine track was 4.5 mm wide, superficial only in the epidermal layer, and red spots were visible on the pink base without bleeding. At the beginning of the track, there were two concave holes 2 mm in diameter and 5 mm apart from each other, also without bleeding. The serologic test confirmed the presence of Fasciola sp. with an antibody titer of 1/12,800. Two consecutive stool examinations at three-day intervals showed no Fasciola sp. eggs. In the second blood cell counts, the proportion of eosinophils remained unchanged at 2%.

The fluke was 10 mm long and 5 mm wide when alive, and 21 × 5 mm after being stained with acid carmine (Figure 2). It was thin, long, and widest at the middle of the body. The ventral sucker was close to the oral sucker and located at the base of the cephalic cone. The esophagus was well-developed and divided into two dendritic ceca extending to the posterior end. The fluke presented internal structures similar to Fasciola, the large liver fluke.

Ectopic infection with fascioliasis is not uncommon in humans, with reports of 16 of 185 cases,8 2 of 25 cases,9 and 2 of 500 cases.7 Subcutaneous infections have also been reported in 14 of 24 ectopic infections10 and 1 of 11 cases,5 and 10 of 16 cases were subcutaneous or muscular infections.8 In the present case, the parasite was a large fluke migrating to the skin, making an angular track in the RUQ region. The two concave holes at the beginning of the track might have been places where the fluke could come in and out, and it had possibly entered the track twice.

In Spain, there was a report of unusual forms of F. hepatica infection, in which a case presented with both subcutaneous and epidermal locations during the course of hepatic fascioliasis, and another case of nervous system infection.9 This seemed to be the first report of epidermal fascioliasis appearing as a localized inflammation of the skin, but not in migratory track similar to creeping eruption. Creeping eruption has been reported in animal hookworm infection and gnathostomiasis, but this type of infection in Fasciola has not been recorded in the literature. Our case seems to be the first report of fascioliasis with a migratory vesicular track. Fasciola gigantica is prevalent among humans and animals in southeast Asia. In Vietnam, Fasciola infection rates among herbivorous animals, especially cattle, have been reportedly up to 30–40%. Most of the cases were Fasciola gigantica. A polymerase chain reaction and nucleotide sequencing techniques have recently showed the presence of F. gigantica among six samples collected from humans and cattle.11 It is assumed that our case was also a F. gigantica infection.

The cutaneous sign of larva migrans in our case appeared after the patient received an antibiotic. Infection of this case could not occur through skin penetration of an excysted meta-cercaria or a juvenile worm. Holes at the beginning of the creeping track confirmed that the worm came from inside the body to the skin. In the case of gnathostomiasis, after the patient takes albendazole, gnathostome larva have a tendency to migrate more superficially and may be easily removed from the body.12 It is possible that the creeping track in this case also resulted from a juvenile Fasciola migrating to the skin after treatment. Further observations are needed before this hypothesis can be proven.