Symptoms and clinical course of the patient. The arrow shows admission to the intensive care unit (ICU) with cerebral convulsions, coma, and respiratory insufficiency. 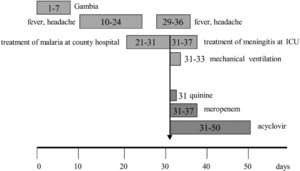 Neurologic complications in the course of Plasmodium falciparum infections are commonly diagnosed as cerebral malaria, but bacterial or viral meningitis may exhibit similar symptoms. One to three weeks after P. falciparum malaria, acute disseminated encephalomyelitis (ADEM) can also mimick the symptoms of cerebral malaria. We describe a 31-year-old woman with life-threatening ADEM five days after successful treatment of P. falciparum malaria. The detection of IgG and IgM antibodies in serum and cerebrospinal fluid (CSF) against multiple viruses and bacteria reflected a non-specific polyclonal B cell activation and was more confusing than helpful for diagnostic decisions. Varicella zoster virus was identified with a reverse transcriptase multiplex polymerase chain reaction in the initially obtained and frozen CSF. This case and findings from the literature indicate that P. falciparum-associated ADEM might not be immune mediated, but of infectious origin. With unclear cerebral complications during or after P. falciparum malaria, prompt initiation of empirical antiviral and antibacterial treatment in addition to antimalarials may reduce mortality.

Neurologic complications in the course of Plasmodium falciparum infections are commonly diagnosed as cerebral malaria. Diagnosis of cerebral malaria is based upon any neurologic manifestation or unarousable coma in a febrile patient having asexual stages of P. falciparum in a thin or thick blood smear. Common symptoms also include intermittent fever, headache, somnolence, vomiting, and convulsions. The incidence of complicated malaria (including cerebral malaria) ranges from 3.7% to 6.3% of malaria cases in travelers from non-endemic countries and 7.5% in adult patients living in endemic areas.1,2 Mortality for cerebral malaria remains between 2% and 6% in imported cases and between 15% and 50% in endemic areas.2–4

Bacterial or viral meningitis may exhibit symptoms similar to cerebral malaria and has to be considered as a major differential diagnoses. The incidences of bacterial and viral meningitis are approximately 2.5/100,000 and 3.1/100,000, respectively, in the western hemisphere.5

Clinical studies and animal models have shown that plasmodia can temporarily suppress a host’s humoral and cellular immune response, predisposing it to superinfections with other microorganisms.6 Thus, the coincidental finding of bacterial or viral meningitis has been reported during or shortly after P. falciparum malaria.7 This might even be the case after clinical recovery from malaria, when immunologic improvement lags.8 One to three weeks after P. falciparum malaria, an acute disseminated encephalomyelitis (ADEM) has been described, which can mimick the symptoms of cerebral malaria and infectious meningoencephalitis and is considered to be immune mediated.9

Fourteen days after returning from a one-week-holiday in Gambia, a 31-year-old woman was admitted to a county hospital in Schwerin, Germany with fever up to 38.5°C and headache that had begun three days prior to admission. Thrombocytopenia (11,000 cells/μL) and mild anemia (hemoglobin level = 6.4 mmol/L [normal = 7.4–10.5 mmol/L) were observed. Peripheral blood films showed P. falciparum with a parasitemia of 7.6%. The results of physical and routine laboratory examinations were otherwise normal. The case history showed that she had taken chloroquine irregularly for malaria prophylaxis and that she had chickenpox 24 years ago. Treatment was initiated with mefloquine (total = 1,500 mg) in the county hospital and the patient completely recovered from fever and parasitemia within three days.

Two days later, the patient developed a low-grade fever, headache, neck stiffness, fatigue, and somnolence; all symptoms progressed during the following 24 hours. When the patient was in precoma, she was diagnosed as having cerebral malaria and transferred by helicopter to our emergency room at the University of Rostock (day 1). Respiratory failure and cerebral convulsions required immediate mechanical ventilation.

Bacterial pathogens and yeasts were not found in blood or CSF by Gram and Ziehl-Neelsen stains or cultures. Serum and CSF antibodies were found against a number of different pathogens; however, the results were rather confusing and did not contribute to the diagnosis (Table 1).

Treatment with quinine was discontinued after 24 hours when five thick and multiple thin blood films were negative for plasmodia. After three days of mechanical ventilation, the fever diminished and the patient recovered slowly. Treatment with acyclovir and meropenem was continued for 14 days.

On day 14, a cerebral MRI showed diffuse thickness of the dura mater including the tentorium and leptomeningeal enhancement, suggesting meningoencephalitis. Six weeks later (day 56), the CSF showed mildly elevated levels of leukocytes (56 leukocytes/μL, lymphocytes = 89%) and protein levels (465 mg/L). During the 12 weeks following admission, fatigue and vomiting attacks slowly subsided. The results of repeated cerebral MRI were then normal. However, attacks of cephalgia persisted for six months.

The result of a retrospective PCR workup of the initial CSF, which had been frozen at −70°C on day 1, was negative for herpes simples virus 1 (HSV-1), HSV-2, echovirus, enterovirus, Listeria, and Legionella. However, VZV was identified with the RT multiplex PCR. The PCR product was sequenced and showed a 224-basepair fragment of VZV DNA.

Although intravenous quinine is recommended for treatment of hyperparasitemic P. falciparum malaria, the patient in this study had improved after treatment with mefloquine before transfer to our hospital. High fever, neck stiffness, somnolence, cerebral convulsions, coma and CSF abnormalities five days after P. falciparum malaria supported the diagnosis of ADEM in this patient. However, these symptoms can also be attributed to cerebral malaria or meningitis of bacterial or viral origin or both.7,10 Also, a variety of fungi, parasites, and drugs, such as mefloquine, can cause symptoms mimicking cerebral malaria or meningoencephalitis.7,11 Non-infectious causes of similar symptoms are central nervous system hemorrhage, collagen vascular disease, exposure to drugs and toxins, inborn errors of metabolism, and malignant diseases.12

The World Health Organization criteria require acute symmetric encephalopathy and evidence of parasitemia for the diagnosis of cerebral malaria.13 When multiple thin and thick blood smears were negative for plasmodia within 24 hours after the onset of cerebral symptoms in our patient, treatment with quinine was stopped but antiviral and antibacterial treatment was continued (Figure 1).

The detection of IgG and IgM antibodies in serum and CSF against a broad spectrum of viruses and bacteria reflects a non-specific polyclonal B cell activation, as often seen with herpes virus infections.14 These findings were confusing rather than helpful in diagnostic decisions in our patient.

A retrospective PCR workup of the initially obtained CSF resulted in a diagnosis of VZV infection. Since serum IgG antibodies to VZV were present and IgM antibodies to VZV were absent in the early course of the disease, the VZV infection in our patient reflects a reactivation, probably due to a transient depression of T cell-mediated immunity during or after malaria.6,8 Uncommon episodes of herpes zoster have been demonstrated in children, suggesting an association of VZV reactivation and immunosuppression induced by malaria.15

Cerebral complications of VZV infection occur in approximately 1% of cases before, during, or after, or without the appearance of typical skin lesions.9,16,17 In a recent study of 287 patients with meningitis, encephalitis, or other neurologic diseases or symptoms, VZV DNA was demonstrated with a PCR in the CSF in 25 (8.7%) and intrathecal antibodies to VZV were found in 55 (19.1%).18 Varicella zoster virus-associated aseptic meningitis, meningoencephalitis, myelitis, ataxia, Reye’s syndrome, and Guillain-Barré syndrome have been reported in older and in transiently immunosuppressed patients, but not in association with malaria.16,19 One-third of the patients experience residual headaches, seizures, or persisting electroencephalographic abnormalities. Mortality can be as high as 25%.20 A clinical benefit of early therapy with acyclovir (10 mg/kg three times a day) for HSV and VZV encephalitis has been reported to reduce mortality from 30% to less than 10%.11

An immune-mediated ADEM with fever, cephalgia, fatigue, focal neurologic deficits, bilateral optical neuritis, convulsions, symptomatic psychosis, coma, and death has been described. This syndrome typically occurs 1–3 weeks after P. falciparum or viral (VZV) infections, and is thought to be mediated by non-specific polyclonal immune stimulation.9,21 The clinical benefit of antiviral and antibacterial therapy and epidemiologic evidence suggest that the origin of this syndrome is infectious rather than immunologic;22–24 however, ADEM has also been reported after vaccinations.25 A retrospective study with 91 cases of postinfectious encephalomyelitis showed higher mortality and more sequelae among those who received corticosteroids compared with those with antibiotic therapy alone.22 The difficulties in establishing such a diagnosis in acute neurologic presentations have been recently highlighted,26 and there is no standard therapy for ADEM.27

Our case report suggests that P. falciparum-associated ADEM might not be immune mediated but of infectious origin, and can be identified retrospectively when initial CSF samples have been stored. With unclear cerebral complications during or after P. falciparum malaria, prompt initiation of empirical antiviral and antibacterial treatment in addition to antimalarials may reduce mortality.