Plasma concentrations of Granzyme A (GrA), Granzyme B (GrB), interferon-γ–inducible protein 10 (IP-10), and monokine induced by IFN-γ (Mig) in patients with scrub typhus and healthy blood donors. Horizontal lines represent medians and dashed lines represent the detection limits of the assays. P values reflect differences between groups by the Mann-Whitney U test. 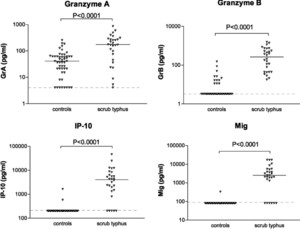 ACTIVATION OF CYTOTOXIC LYMPHOCYTES IN PATIENTS WITH SCRUB TYPHUS

Thai patients with scrub typhus caused by the intracellular pathogen Orientia tsutsugamushi displayed elevated plasma concentrations of granzymes A and B, interferon-γ (IFN)-γ–inducible protein 10, and monokine induced by IFN-γ. These data suggest that activation of cytotoxic lymphocytes is part of the early host response to scrub typhus.

Scrub typhus or tsutsugamushi disease is caused by Orientia tsutsugamushi, a gram-negative obligate intracellular bacterium that usually infects endothelial cells, macrophages, and polymorphonuclear leukocytes, invading these cells through phagocytosis by the host, but escaping the phagosome.1 Scrub typhus is an important cause of febrile illness in southeast Asia, causing up to 10–35% of all fevers without an obvious focus in certain areas in Thailand,2 and is transmitted to humans by the bite of the larval-stage trombiculid mites (chiggers). The clinical features of this disease vary in severity from a mild and self-limiting flu-like syndrome to a potentially fatal disease, and are characterized by fever, eschar formation, headache, muscle pain, conjunctival suffusion, lymphadenopathy, hepatosplenomegaly, and a cutaneous rash.1

A cell-mediated immune response plays an important role in host defense against intracellular pathogens.3 We recently reported elevated plasma concentrations of interferon-γ (IFN-γ) in patients with scrub typhus,4 suggesting that this disease is associated with activation of a cell-mediated immune reaction. In the present study, we sought to obtain a first insight into activation of cytotoxic T cells and natural killer (NK) cells, together often referred to as cytotoxic lymphocytes (CLs), during scrub typhus. For this, we measured the plasma concentrations of granzymes, degranulation products of CLs,5 and IFN-γ-inducible protein 10 (IP-10) and monokine induced by IFN-γ (Mig), two chemokines known to specifically target NK and T cells,6 in patients with scrub typhus and healthy controls from the same area.

The present study was part of an epidemiologic and immunologic study of acute febrile illness in Udon Thani, of which some results have been recently published.4 In this study, a diagnostic work-up including bacterial culture and repetitive serologic testing was performed in consecutive patients admitted with acute febrile illness at Udon Thani General Hospital in Udon Thani in northeastern Thailand. All sera were tested for scrub typhus using an indirect fluorescent antibody test (National Institutes of Health, Ministry of Public Health, Bangkok, Thailand) conducted at Siriraj Hospital at Mahidol University. The diagnosis of scrub typhus was made in the case of a ≥ 4-fold increase in IgM titers between acute and convalescent sera or a single high IgM titer > 1:400.7 Blood samples anticoagulated with EDTA were collected on admission to the hospital prior to antibiotic therapy. In addition, blood anticoagulated with EDTA was also collected from 50 anonymous healthy donors at the blood bank at the same hospital. Plasma was separated immediately and stored at −70°C until assays were performed. The study was reviewed and approved by the ethical and scientific review subcommittee of the Thai Ministry of Public Health. Human experimentation guidelines of the Udon Thani General Hospital were followed. Informed consent was obtained from all patients.

All mediators were measured by specific enzyme-linked immunosorbent assays according to the instructions of the manufacturer (with detection limits): granzyme A (4.1 pg/mL) and granzyme B (3.3 pg/mL) from the Central Laboratory of the Netherlands Red Cross Blood Transfusion Service (CLB, Amsterdam, the Netherlands), IP-10 (204.8 pg/ mL) from R&D Systems (Abingdon, United Kingdom), and Mig (82.3 pg/mL) from Pharmingen (San Diego, CA).

Values are given as medians and ranges. Differences between controls and patients were analyzed by the Mann-Whitney U test. Correlations between the duration of symptoms and the levels of granzymes, IP-10, and Mig were determined using Spearman’s rho test. P < 0.05 was considered to represent a statistical difference.

Cytotoxic lymphocytes are the effector cells of cell-mediated immunity that are considered to play an important role in host defense against intracellular pathogens by virtue of their capacity to lyse cells infected by such microorganisms.5 Cytotoxic lymphocyte–induced cytotoxicity in part is mediated by the granule exocytosis pathway, which involves the release of a family of serine proteases, called granzymes, into the intercellular space between the CL and the target cell. Both granzyme A and granzyme B are important for the initiation of apoptosis in the target cell. Since granzymes are degranulation products of activated CLs, elevated plasma concentrations of soluble granzymes are considered to reflect the involvement of cytotoxic T cells and NK cells in various disease states. Therefore, to obtain insight into CL activation in patients with scrub typhus, we first measured the plasma concentrations of granzymes and compared these with the circulating granzyme levels in healthy blood donors from the same area. Granzyme levels were higher in patients with scrub typhus (granzyme A: median = 175.1 [range = ≤ 4.2–874.3] pg/mL; granzyme B: median = 264.7 [range = 17.8–1,551) pg/mL]) than in healthy controls (granzyme A: median = 41.2 [range = ≤ 4.2–256.7] pg/mL; P < 0.0001; granzyme B: median = 3.3 [range = ≤ 3.3–153.0] pg/mL; P < 0.0001) (Figure 1).

CXC chemokines represent a group of chemokines in which one amino acid separates the first two cysteine residues adjacent to each other (cysteine - X amino acid - cysteine, or CXC). These chemokines can be further subdivided into ELR-positive chemokines, which possess a three amino acid motif termed ELR (glutamic acid - leucine - arginine) near the N-terminal end, and ELR-negative CXC chemokines. Interferon-γ-inducible protein 10 and Mig are members of the ELR-negative CXC chemokine family, which play an important role in cell-mediated immunity.6 These two chemokines, which were discovered as products of genes inducible in response to IFN-γ, bind specifically to CXCR3, which is only expressed on activated NK cells and T lymphocytes.8 They were detectable in only two and one of the healthy donors, respectively (Figure 1). Both mediators were strongly elevated in patients with scrub typhus (IP-10: median = 4,069 [range = ≤ 204.8–46,530] pg/mL; Mig: median = 2,552 [range = ≤ 82.3–17,309] pg/mL; both P < 0.0001 versus controls).

Our data extend earlier reports on the circulating levels of granzymes in patients with infections caused by Epstein-Barr virus, human immunodeficiency virus type 1, and cytomegalovirus.9,10 In addition, our group recently reported that melioidosis, a facultative intracellular gram-negative bacterial infection that like scrub typhus is an important cause of febrile disease in southeast Asia, is associated with systemic release of granzymes, IP-10, and Mig.11,12 Thus, elevated plasma levels of granzymes, IP-10, and Mig are not unique for scrub typhus and would not be able to discriminate scrub typhus from other causes of febrile disease in the area in which this study was conducted. To the best of our knowledge, this is the first study in which the production of these mediators has been investigated in patients with scrub typhus. The strongly elevated levels of granzymes, IP-10, and Mig in these patients provide evidence for activation of CLs in the host response to O. tsutsugamushi.