Abdominal computed tomography scan of the patient. Multiple small hypodense lesions with ill-defined margin are present in the liver and spleen.

Microscopic view of the liver of the patient, showing features of tuberculosis with chronic granulomatous inflammation with caseation and giant cells (hematoxylin and eosin stained, magnifications × 100 in A and × 200 in B). 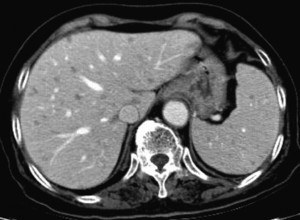 HYPERCALCEMIA IN HEPATIC TUBERCULOSIS: A CASE REPORT IN KOREA

Search for other papers by EUN SEOK KANG in
Current site
Google Scholar
PubMedClose
,
MI YOUNG DO
MI YOUNG DO

Search for other papers by MI YOUNG DO in
Current site
Google Scholar
PubMedClose
,
SO YOUNG PARK
SO YOUNG PARK

Although primary hyperparathyroidism and malignant diseases account for approximately 90% of the causes of hypercalcemia, they could occur in association with granulomatous diseases such as tuberculosis or sarcoidosis, especially in developing countries. Hepatic tuberculosis is difficult to diagnosis without suspicion in cases with normal findings on chest radiographs. We report a 70-year-old woman who presented with hypercalcemia due to hepatic tuberculosis. The diagnosis was made by a computed tomography scan and laparoscopic evaluation. After treatment with anti-tuberculosis medication, her hypercalcemia resolved. Increased vitamin D synthesis by activated macrophages in the granuloma tissue is the major mechanism of hypercalcemia in tuberculosis.

A 70-year-old woman was admitted to Yonsei University Severance Hospital with generalized weakness and lethargy over a period of eight months. She reported no personal or family history of tuberculosis. On examination, she had an obvious weight loss of 6 kg during the last 8 months, but the results of the physical examination were normal. Laboratory tests showed the following results: white blood cell count = 5,590/mm3, hemoglobin level = 9.1 g/dL, and platelet count = 236,000/mm3. The total calcium level was elevated (13.5 mg/dL) and the ionized calcium level was also elevated (6.67 mg/dL). The phosphate level was within the normal range. The blood urea nitrogen level (33.4 mg/dL) and creatinine concentration (1.6 mg/dL) were mildly elevated. Total protein, albumin, and alkaline phosphatase levels were normal.

The parathyroid hormone (PTH) level was slightly decreased (6.38 ρg/mL). The PTH-related peptide (PTH-rp) level was normal. Thyroid function test results were normal. The carcinoembryonic antigen and α-fetoprotein levels were within normal ranges. A 24-hour urine study showed that calcium excretion and phosphate excretion were within normal limits. The results of a chest radiograph were normal. Intravenous hydration with normal saline was started on admission, and serum urea nitrogen and creatinine levels decreased to be 12.8 and 1.2 mg/dL, respectively, but the serum calcium level remained slightly elevated above the upper normal limit. A bone marrow study showed 20% cellularity in the marrow with a nearly normal myeloid cell to erythroid cell ratio, full maturation of myeloid and erythroid cells, and an adequate number of megakaryocytes without aggregates of plasma cells. Primary hyperparathyroidism, hypercalcemia of malignancy, and multiple myeloma were excluded. Abdomen computed tomography showed multiple, small, ill-defined, hypodense lesions in both the liver and spleen (Figure 1). A laparoscopic biopsy was performed. Pathologic examination showed chronic granulomatous inflammation with multinucleated giant cells and caseating necrosis, compatible with tuberculosis (Figure 2). The results of Ziehl-Neelsen staining of the granuloma for acid-fast bacilli were negative. Histologically, the presence of a caseating granuloma is diagnostic.4–6

The patient was diagnosed as having hepatic tuberculosis with hypercalcemia. Anti-tuberculosis chemotherapy including daily isoniazid (300 mg), rifampin (450 mg), ethambutol (800 mg), pyrazinamide (1 gram), and pyridoxine (50 mg) was initiated. Within one week of the initiation of therapy, the serum calcium level dramatically decreased to 9.4 mg/dL, and the patient showed a markedly improved sense of well-being. Pyrazinamide was discontinued after two months of therapy while the rest of medications were continued for 12 months without recurrence. Over the next six months, a follow-up abdominal computed tomography scan showed resolution of her previous lesions in the liver and spleen.

Hypercalcemia in chronic renal failure is due to vitamin D medication for preventing secondary hyperparathyroidism and use of calcium carbonate as a phosphorus binder. Hypocalcemia is usually seen in advanced renal failure. The mechanism of hypercalcemia in granulomatous diseases is deregulated production of 1, 25(OH)2D3 in activated macrophages and granuloma tissues.9 The 1, 25(OH)2D3 synthesized in T lymphocyte participates in cellular immunity and plays an important role in the immune reaction against mycobacteria. Normally, vitamin D synthesized in T lymphocytes reinforces macrophages to kill mycobacteria without affecting calcium metabolism. Large amounts of 1, 25(OH)2D3 production would result in hypercalcemia.10 However, impairment of calcium metabolism is not always associated with increased serum levels of 1, 25(OH)2D3, and not all tuberculosis patients develop hypercalcemia. The development of hypercalcemia in tuberculous patients also depends partially on dietary calcium intake. The other determining factor is the difference in effectiveness of 25(OH) D3 synthesized from 7-dehydrocholesterol in skin. Ultraviolet light is essential in this reaction. In tropical areas where there is a large amount of sun exposure, the concentration of 25(OH) D3 increases with an increase in active vitamin D synthesis. This theory is supported by the fact that incidence of tuberculous hypercalcemia is high in areas with large amount of sun exposure such as Australia and Malaysia.11,12 Most cases of hypercalcemia with tuberculosis are asymptomatic or mild. Active tuberculosis is more likely to be associated with severe hypercalcemia.3 It is reported that after 18–24 months of anti-tuberculosis medication, 85% of the patients showed complete remission. Generally, isoniazid, streptomycin, and ethambutol are known to be less harmful to the liver and are used in hepatic tuberculosis patients during the first 4–6 weeks. Poor prognostic factors of hepatic tuberculosis include an age less than 20 years old, acute hepatic involvement, chronic renal failure, diabetes, alcohol intoxication, steroid medication, prolonged prothrombin time, and severe caseous necrosis.13