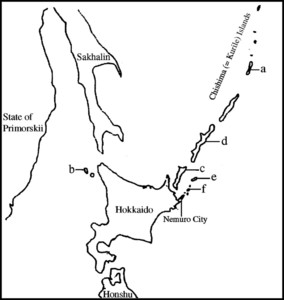 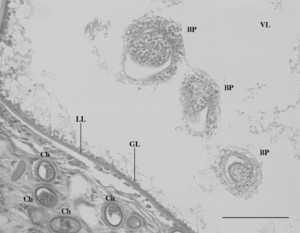 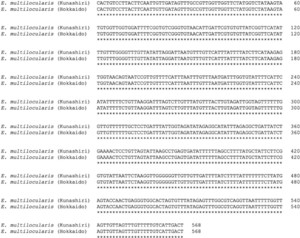 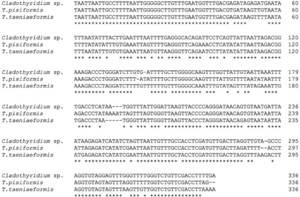 There are two foci of alveolar echinococcosis (AE) caused by Echinococcus multilocularis in Japan. The first focus is on Rebun Island where AE patients were found from 1937, and the second is in eastern Hokkaido where patients have been found since the 1960s. The origin of the second focus is unknown. To further investigate AE in eastern Hokkaido, wild rodents (Muridae) were captured and examined for infection on Kunashiri Island, which is located 15 km off the northeastern coast of Hokkaido. Metacestodes of E. multilocularis were isolated from two of 31 voles, all of which were identified to be Clethrionomys rufocanus. Mitochondrial DNA sequencing data of recovered cestodes showed total identity with the cestode reported from Hokkaido. These results suggest that E. multilocularis may have been introduced to Hokkaido from Kunashiri Island during or after 1965.

Alveolar echinococcosis (AE),1 which is caused by ingestion of eggs of the fox tapeworm Echinococcus multilocularis, is the most potentially lethal parasitic infection of the non-tropical areas in the northern hemisphere because of its tendency to invade and proliferate in the liver and the difficulty in treatment.1–3 Known endemic areas in Far East Asia include China3–5 and Hokkaido, Japan.6 However, there is no previous information available on the distribution of E. multilocularis or the endemic areas of AE in eastern Siberia, including State of Primorskii and Sakhalin (Figure 1).

Historically, there have been two foci of AE recorded in Hokkaido, Japan. The first is on Rebun Island (b in Figure 1), which has an area of 83 km2 and is located 45 km off the northwestern coast of Hokkaido. It has been documented that E. multilocularis was accidentally introduced onto Rebun Island with 12 pairs of red foxes (Vulpes vulpes) from Simushir Island in the Chishima (Kurile) Islands between 1924 and 1926 for the purpose of control of voles and production of fox fur.6,8 The first human case of AE in Hokkaido was reported in a 28-year-old woman from Rebun Island in 1937. To date, 131 human AE cases have been reported on this small island.8 However, field studies conducted in 1948 showed few infected final hosts (dogs and cats) and no metacestodes in rodents.8 Therefore, transmission of the parasite was already considerably reduced at that time due to the earlier eradication of foxes, mainly through illegal hunting for selling fox fur.3,10,11 It is now illegal to introduce dogs and cats onto this island and the parasite has been eradicated from it since the 1960s.3,10–12

The other focus is in the eastern part of Hokkaido Island. In contrast, there are no critical historical data to explain the rapid spread of AE that has been reported since 1965 in the northeastern part of Hokkaido.6,12 To investigate the origin of AE in eastern Hokkaido, we conducted a field survey of wild rodents on Kunashiri Island from July 10 to July 27, 2003. This island is very close to eastern Hokkaido; however, there are no previous reports of E. multilocularis on this island.

A total of 31 wild rodents (voles), including Clethrionomys rufocanus, were captured (20 at a location 44°17′N, 146°11′E, 8 at 43°55′N, 145°39′E, 2 at 44°02′N, 145°50′E, and 1 at 44°25′N, 146°30′E). A detailed report on the fauna at this field survey will be published elsewhere. Thirteen livers and one spleen were collected from 13 rodent specimens and preserved in 100% ethanol for parasitologic examinations. These 14 specimens were examined for parasites at Asahikawa Medical College as a joint project. Eight of the 13 hepatic specimens had no observable cysts on their surfaces. Five others showed macroscopic cyst-like lesions that were dehydrated and embedded in paraffin wax. Sections (5 μm thickness) were stained with hematoxylin and eosin or periodic acid/Schiff. They were confirmed to be E. multilocularis (n = 2), Capillaria hepatica (n = 2), and Cladothyridium sp. (n = 1). Among the two infected specimens of C. rufocanus, one was infected with both E. multilocularis and eggs of C. hepatica (Figure 2), whereas the other only with E. multilocularis in both the liver and spleen. Echinococcus multilocularis and Cladothyridium sp. were confirmed by mitochondrial DNA (mtDNA) sequencing analysis. The mtDNA samples were prepared using the DNeasy Tissue kit (Qiagen, Hilden, Germany). For E. multilocularis, a partial nucleotide sequence of the cytochrome b gene was determined according to a previously published method.13 For Cladothyridium sp., the 16S ribosomal RNA gene (rrnL) was amplified using primers designed based on the nucleotide sequence of rrnL from E. multilocularis. The polymerase chain reaction protocols consisted of 30 cycles of denaturation (30 seconds at 94°C), annealing (30 seconds at 56°C), and extension (90 seconds at 72°C) plus one cycle of 5 minutes at 72°C. DNA sequencing for both genes was performed using the Genetic Analyzer (ABI PRISM model 310; Applied Biosystems, Foster City, CA).

It would be interesting to conduct field surveys on these four northern islands (Etorofu, Kunashiri, Shikotan, and Habomai). It is evident from this preliminary work that wild rodents on Kunashiri Island are highly infected with E. multilocularis. This island has a rich mammalian fauna, including red fox (V. vulpes) and brown bear (Ursus arctos). These four northern islands have been inhabited by Russian residents for the past 60 years, and they may have been exposed to eggs of E. multilocularis. A diagnostic survey of these human residents is necessary to evaluate the possibility of AE infection especially on the islands of Etorofu, Kunashiri, and Shikotan, where relatively large populations reside and are involved in the marine product industry.

These authors contributed equally to this work.