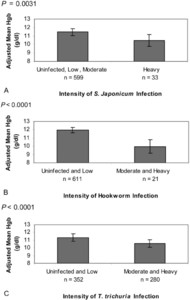 SCHISTOSOMA JAPONICUM AND OCCULT BLOOD LOSS IN ENDEMIC VILLAGES IN LEYTE, THE PHILIPPINES

Schistosoma japonicum has been related to anemia, but the mechanisms mediating this relationship remain unresolved. The primary objective of this study was to assess the role of occult blood loss in mediating S. japonicum-associated anemia after adjusting for age, sex, socioeconomic status (SES), and other helminth infections. The secondary objective was to identify intensity categories of risk for occult blood loss for Trichuris and hookworm after adjustment for the presence of other helminth infections. The role of occult blood loss in mediating S. japonicum-associated anemia was studied cross-sectionally in 729 individuals 8–30 years old in Leyte, The Philippines. Three stool specimens were examined in duplicate for helminth eggs. Hemoglobin, fecal occult blood loss, and anemia were measured and related to the presence and intensity of helminths. Multivariate models were made to adjust for confounding by other helminths and SES. In multivariate models, hemoglobin significantly decreased with increasing infection intensity of S. japonicum, hookworm, and T. trichuria (P < 0.0031, P < 0.0001, and P < 0.0001, respectively). Individuals with higher intensities S. japonicum and T. trichuria were significantly more likely to be fecal occult positive (odds ratio [OR] = 3.54; P = 0.008 and OR = 2.68; P = 0.013, respectively), although this was not true for individuals with hookworm. Additionally, individuals with higher intensities of S. japonicum, hookworm, and T. trichuria were all more likely to be anemic (OR = 3.7, P = 0.0002; OR = 5.3, P = 0.0003; and OR = 1.6, P = 0.021, respectively). It is likely that occult blood loss plays a role only at heavier intensity S. japonicum infections and some other mechanism, such as anemia of inflammation, may be contributing to anemia.

In most areas of the developing world, anemia is exacerbated by helminthiasis1 and understanding the contribution of helminth infections to anemia is crucial for prioritization of scarce health care resources. Schistosoma japonicum has been related to anemia;2,3 however, the mechanisms mediating this relationship are unclear. The three main mechanisms proposed are extra-corporal iron loss due to fecal occult blood loss, anemia of inflammation/chronic disease, and autoimmune hemolytic anemia.4–6 Previous studies of occult blood loss in the context of schistosomiasis have provided varied results. One cross-sectional study in Anhui Province, China did not observe any relationship between occult blood and S. japonicum presence or intensity of infection. However, that study population harbored a low prevalence and intensity of S. japonicum infection.7 In cross-sectional and case-control studies in the context of S. mansoni, investigators found strong evidence for a relationship between stool occult blood loss and intensity of schistosomiasis infection.8–10 These studies, however, did not control for the presence of hookworm and Trichuris infections, which have been associated with occult blood loss at high intensities.1,11

To our knowledge, there have been no studies addressing fecal occult blood loss across a range of S. japonicum infection intensities. Moreover, no previous studies have examined the relationship between fecal occult blood loss and S. japonicum after controlling for potentially important mediating/confounding covariates. In addition, no large-scale, community studies have addressed the risk for fecal blood loss due to Trichuris across a range of infection intensities. The primary objective of this study was to assess the role of occult blood loss in mediating S. japonicum-associated anemia after adjusting for age, sex, socioeconomic status (SES), and other helminth infections. The secondary objective was to identify intensity categories of risk for occult blood loss for Trichuris and hookworm after adjustment for the presence of other helminth infections.

For each participant, three stool specimens were examined in duplicate for S. japonicum, Ascaris lumbricoides, Trichuris trichuria, and hookworm by the Kato Katz method. For each of the stool specimens, the average eggs per gram (epg) of feces of the duplicate test was determined, and the overall mean epg was determined by averaging the three stool specimens. Intensity of infection for each helminth was determined using World Health Organization (WHO) criteria.1,12 Ten hookworm larvae obtained by culturing stool samples13 from 203 volunteers were speciated by a polymerase chain reaction; all were Necator americanus. One stool sample from each individual was evaluated with the Hemoccult® system (Beckman-Coulter, Fullerton, CA), a screening test for the presence of fecal occult blood.

Data forms collected in the field were bar coded and entered using Filemaker 5.5 software (Filemaker Inc., Santa Clara, CA). Normality diagnostics were first performed, and non-normally distributed variables, including epg, were loge transformed [ln(value + 1)]. For comparison of morbidity across infection intensities, e.g., heavy versus uninfected, low, or moderate, categorizations were based on the greatest differences in morbidity for each helminth infection as determined by analysis of variance.

Regression models were constructed to provide unconfounded estimates of the relationships of interest. The primary exposure of interest e.g., helminth infection intensity, was first entered into the model. Variables that were significantly related to the outcome in bivariate analyses (P < 0.10) were then sequentially entered into the model. These were retained if they were significantly related to the outcome of interest, or if their inclusion altered the beta coefficient for the primary exposure of interest by > 10%. Least squared means (LSM) analyses were conducted to determine the adjusted relationship between mean hemoglobin concentration and intensity of helminth infections as defined by WHO criteria.1,12 Logistic regression models were made comparing odds of occult blood loss and anemia (hemoglobin concentration < 11 g/dL) across infection categories, with a similar process for selecting and retaining covariates. All analyses were performed in JMP version 5.1 on PC computers (SAS Institute, Cary, NC).

This study was reviewed and approved by Brown University and The Philippines Research Institute of Tropical Medicine Institutional Review Boards. Written informed consent was obtained from each adult participant or the parents of assenting children.

The study sample consisted of 729 individuals, of which, 449 were male and 280 were female. The mean age (95% confidence interval [CI]) among the volunteers was 14.9 (14.5–15.3) years. Infection with more than one helminth was common, since the prevalence of each of four helminth infections assessed was greater than 50%.

This is the first study to our knowledge to adjust for coinfection with other helminths while assessing the independent risk of occult blood loss from each parasite; our analyses provide adjusted estimates of risk unconfounded by the presence of other helminths. This is also the first study to examine risk for occult blood loss in S. japonicum infection with a sample size that has a sufficient number of heavy intensity infections.

Fecal occult blood loss was also associated with moderate and heavy T. trichuria infections. One study did not observe any relationship between fecal occult blood loss and T. trichuria infection in the absence of dysentery syndrome. The limitation of that sample to those without dysentery led to a very low prevalence of occult positivity (n = 1 of 104).17 Other studies have demonstrated fecal blood loss in hospital-based samples of children with severe trichuriasis.11,18,19 Our community-based findings of increased risk for occult blood loss in the presence of moderate and heavy Trichuris infections may reflect variability in predisposition for mucosal inflammation, colonic ulcers, and blood loss at different intensities of infection.

Study limitations include the lack of characterization of the Trichuris dysentery syndrome, such that we cannot comment on whether blood loss is occurring only among those with true dysentery syndrome or more generally. Additionally, only one fecal occult blood examination was performed. It is possible that occult blood loss from S. japonicum egg translocation across the large bowel and/or polyps is too sporadic to sensitively capture with a single test. Thus, occult blood loss may still play a role in the decreased hemoglobin concentration observed even in those without heavy intensity infections.

In conclusion, this study suggests that mechanisms other than extra-corporeal iron loss may be contributing to S. japonicum-associated anemia, possibly anemia of inflammation. This has important public health implications since iron repletion in the context of inflammation will have markedly dampened clinical efficacy. Ongoing studies of the relationship between S. japonicum-associated inflammation and anemia in this cohort should shed light on this question.