Digestion of 18S ribosomal RNA (rRNA) gene fragments from sand flies with the restriction enzyme Afa I. Partial fragments of 18S rRNA genes from sand flies were amplified by a polymerase chain reaction and the products were then digested with Afa I. DNA samples from minicircle DNA-positive sand flies captured at Chanchan [CC-Lu.97 (lane 1) and CC-Lu.103 (lane 2)] and Alausi [AL-Lu.24 (lane 3), AL-Lu.44 (lane 4), AL-Lu.51 (lane 5), and AL-Lu.54 (lane 6)], Lu. ayacuchensis (lane 7), Lu. hartmanni (lane 8), Lu. trapidoi (lane 9), Lu. Panamensis (lane 10), and Lu. gomezi (lane 11) were used as templates. The numbers on the left are in basepairs. 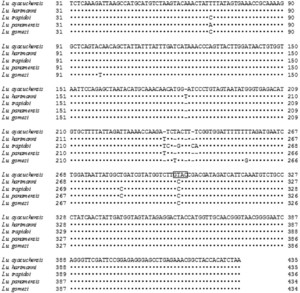 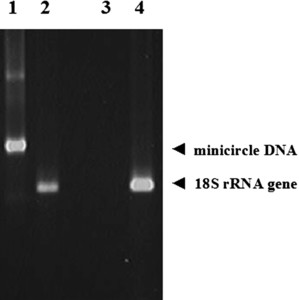 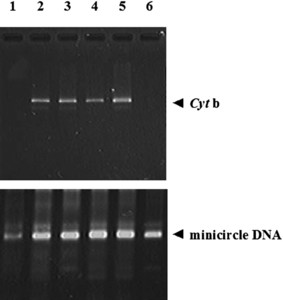 The surveillance of prevalent Leishmania and sand fly species in endemic areas is important for prediction of the risk and expansion of leishmaniasis. In this study, we developed a polymerase chain reaction (PCR)-based method for detection of Leishmania minicircle DNA within individual sand flies. Using this method, we detected minicircle DNA in 6 (3.3%) of 183 sand flies, while 5 (3.5%) of 143 were positive for Leishmania promastigotes in the same areas by microscopic examination. The species were identified as Leishmania (Leishmania) mexicana by nucleotide sequencing of the cytochrome b gene. Additionally, all the Leishmania-positive sand flies were identified as Lutzomyia ayacuchensis by the restriction enzyme digestion of the PCR-amplified 18S ribosomal RNA gene fragments. Since this combined method is relatively easy and can process a large number of samples, it will be a powerful tool for the rapid identification of prevalent sand fly and Leishmania species as well as monitoring the infection rate in sand fly populations in endemic areas.