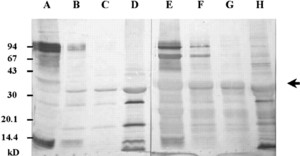 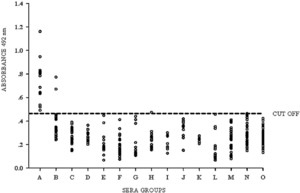 Cathepsin L1, a cysteine protease secreted by the gastrodermis of juvenile and adult Fasciola gigantica, was expressed in Escherichia coli as a calmodulin binding peptide fusion protein with a molecular mass of approximately 35 kD. The recombinant cathepsin L1 (rCTL1) was tested for its antigenic potential in a cystatin capture enzyme-linked immunosorbent assay (ELISA) to diagnose human fascioliasis. The ELISA plates were sensitized with chicken egg cystatin and incubated with bacterial lysates containing the recombinant protein before the standard ELISA procedures were performed. Analysis of the sera of 13 patients infected with F. gigantica (group 1), 204 patients with other parasitic infections (group 2), 32 cholangiocarcinoma patients (group 3), and 42 healthy controls (group 4) showed that the sensitivity, specificity, accuracy, positive predictive value, and negative predictive value of this ELISA using rCTL1 were 100%, 98.92%, 98.97%, 81.25%, and 100%, respectively. These results indicate that this assay has high sensitivity and specificity in the diagnosis of human fascioliasis. In addition, we have produced sufficient amounts of antigen for use in diagnosis.