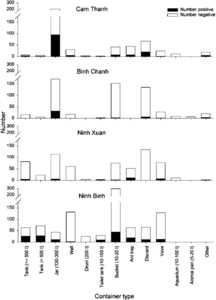 From September 2000 to June 2003, a community-based program for dengue control using local predacious copepods of the genus Mesocyclops was conducted in three rural communes in the central Vietnam provinces of Quang Nam, Quang Ngai, and Khanh Hoa. Post-project, three subsequent entomologic surveys were conducted until March 2004. The number of households and residents in the communes were 5,913 and 27,167, respectively, and dengue notification rates for these communes from 1996 were as high as 2,418.5 per 100,000 persons. Following knowledge, attitude, and practice evaluations, surveys of water storage containers indicated that Mesocyclops spp. already occurred in 3–17% and that large tanks up to 2,000 liters, 130–300-liter jars, wells, and some 220-liter metal drums were the most productive habitats for Aedes aegypti. With technical support, the programs were driven by communal management committees, health collaborators, schoolteachers, and pupils. From quantitative estimates of the standing crop of third and fourth instars from 100 households, Ae. aegypti were reduced by approximately 90% by year 1, 92.3–98.6% by year 2, and Ae. aegypti immature forms had been eliminated from two of three communes by June 2003. Similarly, from resting adult collections from 100 households, densities were reduced to 0–1 per commune. By March 2004, two communes with no larvae had small numbers but the third was negative; one adult was collected in each of two communes while one became negative. Absolute estimates of third and fourth instars at the three intervention communes and one left untreated had significant correlations (P = 0.009−< 0.001) with numbers of adults aspirated from inside houses on each of 15 survey periods. By year 1, the incidence of dengue disease in the treated communes was reduced by 76.7% compared with non-intervention communes within the same districts, and no dengue was evident in 2002 and 2003, compared with 112.8 and 14.4 cases per 100,000 at district level. Since we had similar success in northern Vietnam from 1998 to 2000, this study demonstrates that this control model is broadly acceptable and achievable at community level but vigilance is required post-project to prevent reinfestation.