Prevalence of helminth infection by age in western Kenya. Data are for all children less than 36 months old (with or without an insecticide-treated bed net [ITN]) with a stool examination (n = 1,899). Schistosoma mansoni or S. hematobium were absent. Results did not differ by ITN status. A. = Ascaris; T. Trichuris. 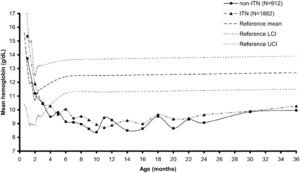 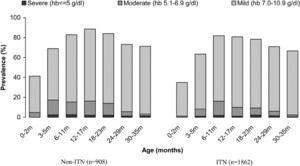 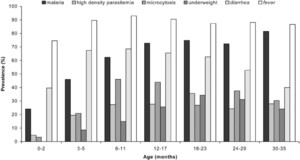 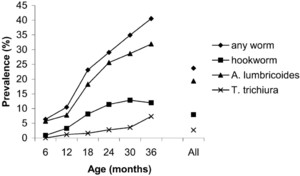 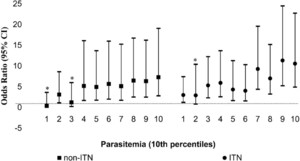 In sub-Saharan Africa, the etiology of anemia in early childhood is complex and multifactorial. Three community-based cross-sectional surveys were used to determine the prevalence and severity of anemia. Regression methods were used to compare mean hemoglobin (Hb) concentrations across covariate levels to identify children at risk of low Hb levels in an area with intense malaria transmission. In a random sample of 2,774 children < 36 months old, the prevalence of anemia (Hb < 11g/dL) was 76.1% and 71%, respectively, in villages without and with insecticide-treated bed nets (ITNs); severe-moderate anemia (Hb < 7 g/dL) was observed in 11% (non-ITN) and 8.3% (ITN). The prevalence of anemia, high-density malaria parasitemia (21.7%), microcytosis (34.9%), underweight (21.9%), and diarrhea (54.8%) increased rapidly from age three months onwards and remained high until 35 months of age. Multivariate analyses showed that family size, history of fever, pale body, general body weakness, diarrhea, soil-eating, concurrent fever, stunting, and malaria parasitemia were associated with mean Hb levels. Prevention of severe anemia should start early in infancy and include a combination of micronutrient supplementation, malaria control, and possibly interventions against diarrheal illness.