Map of Brazil showing the locations of the three tribes studied. 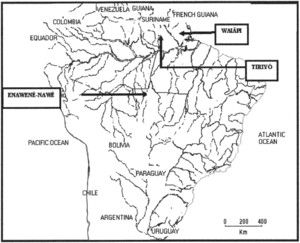 SEROPREVALENCE OF INFECTION WITH TOXOPLASMA GONDII IN INDIGENOUS BRAZILIAN POPULATIONS

The prevalence of Toxoplasma gondii in indigenous Brazilian tribes with different degrees of acculturation was studied in the Enawenê-Nawê, an isolated tribe, in the state of Mato Grosso, the Waiãpi, with intermittent non-Indian contacts, in the state of Amapá, and the Tiriyó, with constant non-Indian contacts, in the state of Pará. An IgG–enzyme-linked immunosorbent assay (IgG-ELISA) or an IgG/IgM–indirect immunofluorescence antibody (IFA) assay were performed for the detection of antibodies to T. gondii in 2000–2001. Both assays showed that the Tiriyó had the lowest crude seroprevalence (55.6%), the Enawenê-Nawê the highest crude seroprevalence (80.4%), and the Waiãpi an intermediate crude seroprevalence (59.6%). The age-adjusted prevalence (95% confidence intervals) values for the Tiriyó, Enawenê-Nawê, and Waiãpi were 57.3% (53.4, 61.1%), 78.8% (72.2, 85.7%), and 57.7% (52.5, 62.9%), respectively. Contact with non-Indians probably did not influence the prevalence of the infection. However, differential contact with soil-harboring oocysts from wild felines may be responsible for the various seroprevalences in the different tribes.