Map of the Morehead District (Western Province of Papua New Guinea) with the 18 villages included in the study. 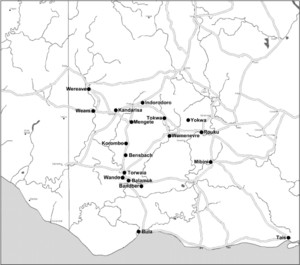 To investigate the spread of human immunodeficiency virus (HIV) and other sexually transmitted viruses, two serosurveys (the first in 1999 among 56 adults and the second in 2001 among 351 adults) were conducted in remote villages of the southwestern part of Papua New Guinea. Only one individual was positive for antibodies to HIV. In 2001, the seroprevalence of human herpes virus 8 (HHV-8) was 32.2%, and the seroprevalence of herpes simplex virus type 2 (HSV-2) was 27.4%. Both prevalence rates increased with age, and were lower in the villages near the Bensbach River. The seropositivity of HSV-2 was independently correlated with HHV-8 infection. Our data show that the inhabitants of the southwestern region of Papua New Guinea currently experience an extremely low circulation of HIV. However, the high prevalence of infectious agents that can be sexually transmitted, such as HSV-2 and to a lesser extent HHV-8, indicates the presence of behavioral patterns that may facilitate the spread of HIV in this area of currently low endemicity.