A, Computed tomography (CT) scan of brain of the patient showing a ring lesion with surrounding edema in right parietal lobe with evidence of mild brain atrophy. B, CT scan of the brain after treatment showing the disappearance of the lesion followed by gliosis. 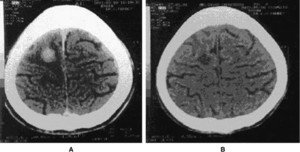 A 37-year-old man was diagnosed as being infected with human immunodeficiency virus (HIV), tuberculosis (TB), tuberculoma of the brain, and visceral leishmaniasis (VL) at the Rajendra Memorial Institute of Medical Sciences in Bihar, India. He had taken anti-tuberculosis therapy (ATT) for two and a half months and had episodes of convulsions with loss of consciousness, tongue bites, and incontinence of urine. The results of a neurologic examination were normal except for a left plantar extensor. He was positive for both HIV-I (confirmed by Western blot) and VL (confirmed by splenic aspirate). Treatment was initiated with amphotericin B lipid complex, a four-drug regimen (rifampicin, isoniazid, ethambutol, and pyrazinamide) of ATT, highly active antiretroviral therapy, anti-convulsants, and other supportive therapies. A repeat computed tomography scan of the brain showed the disappearance of the lesion followed by gliosis. After six months, he was also cured of VL. The triad of infections (HIV, VL, and TB) is a real threat in Bihar as an emerging combination of diseases of public health importance. Keeping these facts in mind, efforts to develop simple and cost effective diagnostic techniques coupled with affordable therapeutic facilities are urgently needed in developing countries.