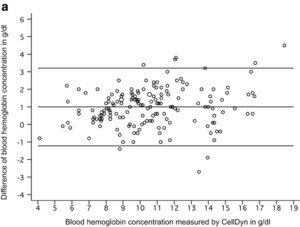 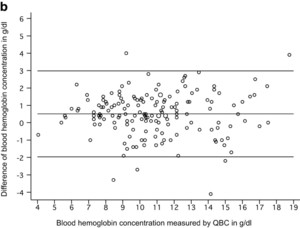 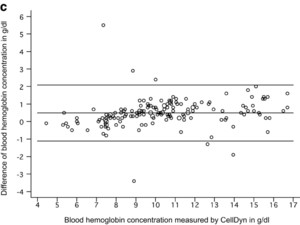 SHORT REPORT: EVALUATION OF A SIMPLE AND INEXPENSIVE PHOTOMETRIC DEVICE FOR THE MEASUREMENT OF HEMOGLOBIN

A wide range of different methods to estimate the blood concentration of hemoglobin is commercially available. However, most of these methods are not suitable for resource-poor clinical care settings, mainly due to either high purchase prices of equipment or high running costs or a combination of both. Non-invasive techniques using near infrared spectroscopy would in many cases be ideal but are not yet commercially available.1

The study was carried out at the Medical Research Unit at the Albert Schweitzer Hospital in Lambaréné, Gabon from January to March 2003. The hemoglobin concentrations in blood samples taken from inpatients and outpatients, as well as from healthy volunteers enrolled in ongoing studies, were evaluated at predefined time points according to the corresponding study protocol. The relevant study protocols were reviewed and approved by the Ethics Committee of the International Foundation of the Albert Schweitzer Hospital. All measurements were performed by one of us (SO) to limit inter-observer variability and were started after the investigator was comfortable with all procedures.

The electronic DHT hemoglobin meter measures blood hemoglobin concentration by its optical density at a wavelength of 523 nm and provides a direct immediate read out on a liquid crystal display in grams/liter.2 For sample measurements, a pipetted volume of 20 μL of blood was thoroughly mixed with 2 mL of 0.04% ammonium chloride solution in a plastic tube for at least three seconds to obtain complete hemolysis. The solution was then transferred into a clean, standard, 10-mm glass cuvette for sample testing. The device requires no calibration, but the accuracy was frequently checked with a reference glass cuvette according to the manufacturer’s instructions. We compared the accuracy of DHT measurements with the values obtained with two other devices: an automatic, high-resolution, flow cytometry-based hematology analyzer (CellDyn 3000; Abbott Laboratories, Santa Clara, CA)3 and a centrifugal, quantitative buffy coat hematology system (QBC I; Becton-Dickinson, Franklin Lakes, NJ).4 The CellDyn analyzer was regularly checked for accuracy using manufacturer-provided reference controls according to the manufacturer’s instruction and, if necessary, re-calibrated. The QBC device does not require calibration. All samples were tested in parallel by the three devices immediately after blood collection. Results were recorded in separate laboratory books and subsequently transcribed into an Excel® (Microsoft, Redmond, WA) spreadsheet. Data were analyzed with Stata version 8.2 for Mac OS X (Stata Corp, College Station, TX) using Spearman correlation and Bland-Altman bias methods.5

Linear correlations of paired measurements were excellent, with Spearman rank correlation coefficients of 0.92 for the paired values of DHT and CellDyn, 0.90 for DHT and QBC, and 0.96 for QBC and CellDyn (P < 0.0001 for all pairs). However, Bland-Altman analysis showed that different methods agreed only poorly: mean differences were 1.0 g/dL (95% confidence interval [CI] = 0.8–1.2 g/dL) with limits of agreement (LOA) of −1.2 g/dL to 3.2 g/dL for the comparison of DHT and CellDyn measurements, 0.5 g/dL (95% CI = 0.3–0.7 g/dL) with LOA of −2.0 g/dL to 3.0 g/dL for DHT compared with QBC measurements, and 0.5 g/dL (95% CI = 0.4–0.6 g/dL) with LOA of −1.1 g/dL to 2.1 g/dL for QBC compared with CellDyn measurements (Figure 1). As demonstrated by the Bland-Altman plots in Figure 1, there was no systematic relationship between differences and level of blood hemoglobin concentrations in any of the pairwise method comparisons. The DHT measurements agreed better with the QBC method in the second half of the test series (sample numbers 81–163), as demonstrated by a non-significant mean difference of 0.1 g/dL (95% CI = −0.1 to −0.4 g/dL), but continued to exhibit wide-ranging LOA of −2.1 g/dL to −2.3 g/dL. Agreement of the DHT with the CellDyn also tended to improve slightly, but still remained poor with a mean difference of 0.7 g/dL (95% CI = 0.5–0.9 g/dL) and with LOA of −1.3 g/dL to −2.7 g/dL. There were two samples with hemoglobin blood concentrations values < 5 g/dL, a value used to define severe malaria anemia, if measured by the CellDyn device, but one of these two samples was above this threshold if measured by both the DHT and the QBC techniques (6.8 g/dL and 10.1 g/dL, respectively). Such a measurement error is of special concern because it will lead to a misdiagnosis of the patient and consequently, to incorrect therapeutic consequences, e.g., outpatient management instead of the required hospitalization. Conversely, it is reassuring that no single unnecessary transfusion would have resulted from either the DHT or the QBC method due to falsely low hemoglobin measurements.

Mean differences of DHT and CellDyn and of DHT and QBC measurements were significantly different when compared between the first and the second half of the test series (samples 1–80 versus 81–163) by the Student’s t-test (P < 0.001 for both comparisons), but mean differences of QBC and CellDyn did not change in a similar way (P = 0.34), thus indicating that the agreement of DHT measurements with those of comparator devices improved during the study, probably due to improvement of technical skills.

We noted systematic differences between blood hemoglobin concentrations measured by the DHT, the QBC, and the CellDyn methods. Therefore, the three methods cannot be used interchangeably because the detected differences within the limits of agreement are large enough to possibly affect decisions on patient management.5

We conclude that the observed poor agreement of the DHT with the CellDyn does not permit the use of the DHT for critical hemoglobin measurements needed in transfusion services. However, its simple operation, portability, and requirement of only 20 μL of blood, obtainable by a finger prick, should encourage further development. Options to improve the agreement including by measuring at a different wavelength of the hemoglobin spectrum, for example, at the more commonly used wavelength of 540 nm, should be explored.