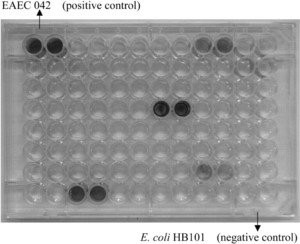 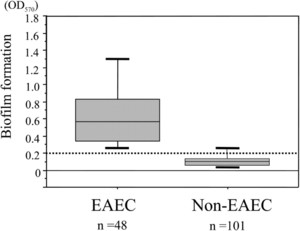 The gold standard for identification of Enteroaggregative Escherichia coli (EAEC) remains the HEp-2 cell adherence test, which is time-consuming and requires specialized facilities. We evaluated the usefulness of a quantitative biofilm assay to screen for EAEC from a total of 1,042 E. coli strains from children with diarrhea. Bacteria were incubated overnight in high-glucose Dulbecco’s modified Eagle’s medium using a polystyrene microtiter plate. The plate was stained with crystal violet after washing, and the biofilm was quantified using an enzyme-linked immunosorbent assay plate reader. The aggR gene was evaluated by a polymerase chain reaction. Forty-eight (77.4%) of 62 strains with an optical density at 570 nm (OD570) > 0.2 were identified as EAEC by the HEp-2 adherence test, while no EAEC was found in strains with an OD570 ≤ 0.2. Twenty-one aggR+ and 27 aggR - EAEC strains could be screened by an OD570 > 0.2 using this assay. Although confirmation by a HEp-2 cell adherence test is needed, this biofilm assay is convenient and useful in screening for EAEC.

Enteroaggregative Escherichia coli (EAEC) is an emerging enteric pathogen that causes persistent diarrhea among infants, both in the developing and industrialized countries.1 The defining feature of EAEC is its characteristic aggregative adherence (AA) to human epithelial cells in culture.2 The EAEC strains adhere to the epithelial cell surface, to the glass substratum, and to each other in a distinctive stacked-brick formation. Thus, the gold standard for EAEC identification remains the HEp-2 cell adherence test. However, this test requires specialized facilities and can only be conducted in reference laboratories,3 although a simplified version of the HEp-2 assay has been reported.4

Baudry and others developed a DNA probe pCVD432 (AA probe) to simplify the identification of EAEC.5 In their original report, the probe was found to be 89% sensitive and 99% specific for detection of EAEC. Later studies have confirmed the high specificity of this probe, but have showed that sensitivity varies between 15% and 90% for EAEC from different locations.1 Furthermore, EAEC outbreaks due to probe-negative strains have occurred in Europe and Japan.6,7 A polymerase chain reaction (PCR) assay with primers derived from the pCVD432 sequence showed similar sensitivity and specificity.8 A PCR method based on the aggR regulatory gene was also developed to identify EAEC.9 Although the aggR gene is a sensitive target, it is much less specific than the CVD432 locus.1 AggR-negative EAEC was also reported as an enteric pathogen of food-borne outbreaks.10

Thus, it is difficult to screen for EAEC among E. coli isolates from patients with diarrhea in clinical laboratories. The use of biofilm assays may be useful in overcoming these difficulties. Nataro and Kaper reported that EAEC produces a bacterial film on a polystyrene surface that could be easily visualized with Giemsa.11 Recently, Sheikh and others reported the quantitative analysis of EAEC biofilms.12 In this study, we evaluated the usefulness of the quantitative biofilm assay to screen for EAEC among clinical isolates of E. coli.

A total of 1,042 E.coli strains from children with sporadic cases of diarrhea in Kagoshima City, Japan were isolated in a bacteriological laboratory from June 2001 through February 2003. Only one stool specimen was tested from each case patient. All specimens were processed by routine microbiologic and biochemical tests in the bacteriological laboratories to identify E. coli. Modified Drigalski agar was used as a primary media. All E. coli-like colonies from a single stool with identical colony morphology and biochemical properties were assumed to be identical; if isolates were found to be identical, only one colony was analyzed further from that specimen. Strains of E. coli were transferred in transport medium to our laboratory at Kagoshima University, where we conducted further investigation. The strains of E. coli were individually stored at −80°C in skim milk for examination.

To assess biofilm formation, we inoculated 200 μL of Dulbecco’s modified Eagle’s medium containing 0.45% glucose in 96-well flat-bottom microtiter polystyrene plates (Becton Dickinson, Franklin Lakes, NJ) with 5 μL of an overnight Luria broth culture grown at 37°C with shaking. The sample was incubated overnight (18 hours) at 37°C and visualized by staining with 0.5% crystal violet for five minutes after washing with water.12 The biofilm was quantified in duplicate, after adding 200 μL of 95% ethanol, by an enzyme-linked immunosorbent assay plate reader at 570 nm. Strain EAEC 042 was used as a positive control and E. coli HB101 was used as a negative control.

Detection of the AA probe-associated gene (aatA) and aggR by a PCR.

All 1,042 strains were examined for detection of the aatA and the aggR gene by a PCR. Since the aatA gene sequence overlaps with the region of the conventional pCVD432 (AA probe),13 we assumed aatA-positive strains to be AA probe positive. The primers for the aatA gene were as follows: 5′-ATGTTACCAGATATAAATATAG-3′ (forward, 2723-2744) and 5′-CATTTCCCCTGTATTG-GAAATG-3′ (reverse, 3766-3787) (GenBank AY351860). The primers for the aggR gene were as follows: 5′-CAGAATACATCAGTACACTG-3′ (forward) and 5′-GAAGCTTACAGCCGATATAT-3′ (reverse).9 The assay was performed in a DNA Thermal Cycler PC707 (Astec, Fukuoka, Japan), and the PCR products were subjected to electrophoresis on agarose gels.

The HEp-2 cell adherence test was performed by the method originally described by Nataro and others with slight modifications.2 Briefly, bacteria were incubated on cultured HEp-2 cells for three hours using a 24-well flat-bottom culture plate, washed, and stained with Giemsa.

Statistical analysis was performed using the Fisher’s exact probability test and the Mann-Whitney’s U test. P values < 0.05 were considered significant.

Figure 1 shows the biofilm formation on a microtiter plate. We found the dark wells to be biofilm positive. The EAEC 042 positive control showed a strong biofilm with a mean ± SD optical density at 570 nm (OD570) of 2.0 ± 0.34, while the E. coli HB101 negative control did not produce a biofilm. The examined strains showed absorbances in the range of 0 to 1.9.

Figure 2 shows the biofilm formation of E. coli strains examined with an HEp-2 cell adherence test. The EAEC showed significantly stronger biofilm formation than non-EAEC strains (P = 0.0013). The dotted line shows an OD570 of 0.2, indicating that EAEC can be screened by identifying an OD570 > 0.2 in this assay. However, similar to EAEC, some non-EAEC strains showed strong biofilms.

The AA patterns of EAEC detected by the HEp-2 cell adherence test in this study are shown in Figure 3. Three AA types were observed in this study according to the classification described in the previous report:14 type A, the typical AA pattern with a honeycomb formation; type B, an AA pattern without the typical honeycomb formation; and type C, an AA pattern with lined-up cells. The incidences of each type in aggR-positive strains and -negative strains are shown in Table 2. The incidence of type A in the aggR-positive strains was significantly higher than that in the aggR-negatitive strains (P = 0.0003). Type C was observed only in the aggR-negative strains. The EAEC strains with the typical AA pattern (type A) showed significantly stronger biofilm formation (median OD570 = 0.72) than did those with the atypical AA pattern (type B or C) (OD570 = 0.36) (P = 0.0005). In a similar manner, the aggR-positive EAEC showed significantly stronger biofilm formation (median OD570 = 0.71) than did the aggR -negative EAEC (OD570 = 0.40) (P = 0.0013).

The importance of EAEC strains in public health around the world is becoming increasingly clear.1 The EAEC strains have been associated classically with persistent diarrhea (≥ 14 days) and with growth retardation in infants.1,11 Therefore, the detection of EAEC strains can make a significant contribution to public health in many areas. Because the gold standard HEp-2 cell adherence test is time-consuming, there is a need for a convenient assay to detect EAEC. We applied the quantitative biofilm assay using a microtiter plate to screen for EAEC among E. coli isolates from children with diarrhea. All EAEC strains in this study showed an OD570 > 0.2 in the assay, and the incidence of EAEC among the strains with an OD570 > 0.2 was 77.4%. Although confirmation by a HEp-2 cell adhesion test is needed to identify EAEC, this biofilm assay is convenient and useful in screening for EAEC. In particular, it is more convenient when a large number of strains are examined in clinical and epidemiologic studies. This assay may be more useful in developing countries where EAEC is often a major problem, because it can be done quickly while the patient is still ill. Furthermore, the test may be available without a spectrophotometer, since a biofilm showing an OD570 > 0.2 is clearly visible.

Bacterial clump formation at the surface of liquid culture was previously reported as a rapid test to identify EAEC.15,16 This convenient test is also based on the biofilm formation of EAEC and useful for screening, but it is not quantitative. Furthermore, it may overlook EAEC strains with weak biofilm formation.

Recently, Cerna and others reported a multiplex PCR assay using three plasmid-borne genes (the AA probe, aap, and aggR) as a convenient and sensitive molecular test to detect EAEC.3 Indeed, this test is useful and has increased sensitivity, but it is expensive to use when examining a large number of strains. Furthermore, the test cannot detect EAEC without the plasmid-borne genes. Indeed, Nataro recently suggested using the term typical EAEC to refer to strains expressing the AggR regulon.17 We found a strong association of typical EAEC with diarrhea in a previous report.14 However, atypical EAEC such as AggR-negative EAEC was also reported as an enteric pathogen of food-borne outbreaks.6,7,10 In our assay, we could screen both the AggR-negative and AggR-positive EAEC efficiently. Although the pathogenesis of atypical EAEC without the AggR regulon remains to be determined, we believe that screening AggR-negative EAEC is also important in clinical and epidemiologic studies.

In our study, 14 (22.6%) of 62 strains with an OD570 > 0.2 were not identified as EAEC by the HEp-2 adherence test. These included diffuse-adhering E. coli strains and strains without adhesion on HEp-2 cells, the virulence of which needs to be investigated.

Three AA patterns by the HEp-2 cell adherence test were observed in this study, which showed the heterogeneity of EAEC adherence patterns. The differences in adhesion pattern may be caused by variations in adhesive fimbriae. The aggR-positive strains mainly showed the typical AA pattern with a honeycomb formation and significantly stronger biofilm formation, which may be attributable to the transcriptional activation of adhesin genes by AggR.1,11 Conversely, the pathogenesis and mechanism of adhesion of the aggR-negative strains with an atypical AA pattern need further investigation.

In conclusion, the quantitative biofilm assay using a microtiter plate is convenient and useful in screening for EAEC among E. coli isolates. The best use of this test is to screen large numbers of isolates quickly, so that the more time-consuming HEp-2 assay can be reserved for a smaller number of samples. In addition, this assay may contribute to demonstrating the true incidence of EAEC with and without aggR among clinically isolated E. coli strains.

Incidences of aatA, aggR, and EAEC in each group classified by absorbance*