Jujuy Province in Argentina and localities of the origin of cases of hantavirus pulmonary syndrome and rodents positive for antibodies to hantavirus antibody selected for polymerase chain reaction analysis.

Phylogenetic tree inferred by maximun parsimony analysis of a 1,371-nucleotide fragment of M-G2 sequences of a representative strain of Orán (ORN), and Bermejo (BMJ) viruses derived from hantavirus pulmonary syndrome case samples, and La-guna Negra (LN) virus derived from Calomys callosus samples from Yuto, Argentian and other previously characterized hantaviruses. The third base position was removed from the analysis. Bootstrap confidence limits were calculated by using 500 repetitions of analysis; values > 50% are indicated at branch points. Vertical branches are for visual purposes only. For M segment sequence GenBank accession numbers used in this study and definitions of abbreviations, see Figure 2. 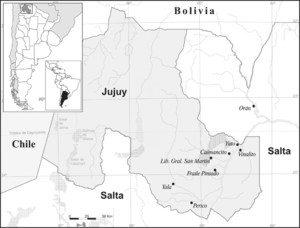 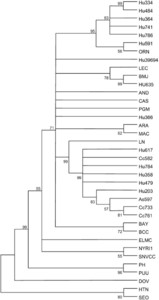 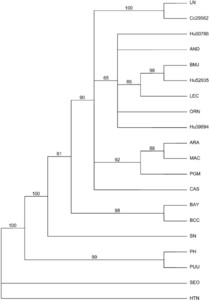 The purpose of this study was to characterize the hantaviruses circulating in northwestern Argentina. Human and rodent studies were conducted in Yuto, where most cases of hantavirus pulmonary syndrome (HPS) occur. Partial virus genome sequences were obtained from the blood of 12 cases of HPS, and from the lungs of 4 Calomys callosus and 1 Akodon simulator. Phylogenetic analysis showed that three genotypes associated with HPS circulate in Yuto. Laguna Negra (LN) virus, associated with C. laucha in Paraguay, was identified for the first time in Argentina; it was recovered from human cases and from C. callosus samples. The high sequence identity between human and rodent samples implicated C. callosus as the primary rodent reservoir for LN virus in Yuto. The genetic analysis showed that the Argentinian LN virus variant differed 16.8% at the nucleotide level and 2.9% at the protein level relative to the Paraguayan LN virus. The other two hantavirus lineages identified were the previously known Bermejo and Orán viruses.