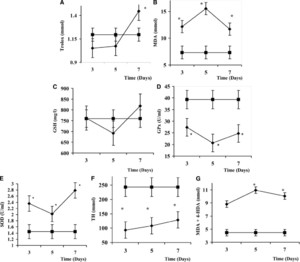 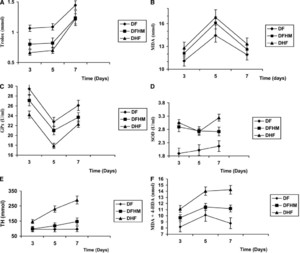 An association between viral diseases and increased oxidative stress has been suggested. The time course of serum levels of total antioxidant status (TAS), peroxidation potential (PP), glutathione (GSH), lipid peroxidation measured as hydroperoxides, and malondyaldehyde and 4-hydroxyalkenals (MDA + 4-HDA), as well as antioxidant enzymatic activity of superoxide dismutase (SOD) and glutathione peroxidase (GPx), were measured in 22 serologically confirmed dengue patients. Most of the patients had dengue fever and three of them had dengue hemorrhagic fever. The redox parameters were compared with those of age- and sex- matched controls. No significant difference was observed for levels of GSH and TAS between patients and controls. Levels of PP, MDA + 4-HDA, and SOD were significantly higher. Levels of GPx and total hydroperoxides were significantly lower in patients in comparison with controls. These findings suggest that the alteration in redox status could result of increased oxidative stress and it may play a role in the pathogenesis of the disease.