Distribution of (a) seropositive and (b) seronegative participants in the household survey of dengue infection in Goiânia, Brazil in 2001.

Kernel estimate of dengue seroprevalence in Goiânia, Brazil in 2001. 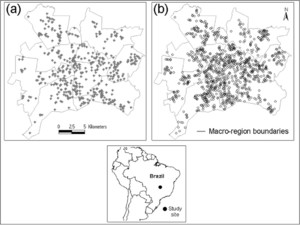 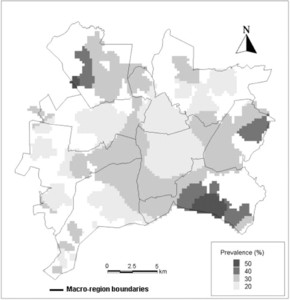 Urban dengue fever is now considered a major public health threat in most American countries. A household survey was conducted in the city of Goiânia in central Brazil in 2001 to assess prevalence of dengue infection and individual and area-based risk factors. Spatial point pattern analysis was performed using the dual Kernel method. A total of 1,610 households were surveyed; 1,585 individuals more than five years old had blood and data collected. Sera were tested for IgM/IgG antibodies by an enzyme-linked immunoassay. Area-based indicators derived from census data were linked to geocoded residential address. The seroprevalence of dengue was 29.5% and the estimate prevalence surface reached 50% in the outskirts areas. The risk of infection was significantly associated with older age (P < 0.01), low education (odds ratio [OR] = 3.45, 95% confidence interval [CI] = 1.82–6.55), and low income (OR = 1.32, 95% CI = 1.02–1.71) in multivariate analysis. This study highlighted the heterogeneity of dengue transmission within the city and can assist in spatial targeting control interventions.