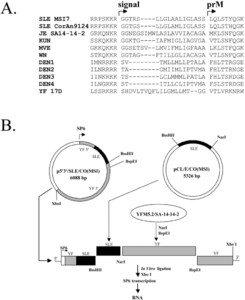 CONSTRUCTION OF YELLOW FEVER/ST. LOUIS ENCEPHALITIS CHIMERIC VIRUS AND THE USE OF CHIMERAS AS A DIAGNOSTIC TOOL

St. Louis encephalitis (SLE) and West Nile (WN) flaviviruses are genetically closely related and cocirculate in the United States. Virus neutralization tests provide the most specific means for serodiagnosis of infections with these viruses. However, use of wild-type SLE and WN viral strains for laboratory testing is constrained by the biocontainment requirements. We constructed two highly attenuated yellow fever (YF) virus chimeras that contain the premembrane-envelope (prM-E) protein genes from the virulent MSI-7 (isolated in the United States) or the naturally attenuated CorAn9124 (Argentina) SLE strains. The YF/SLE (CorAn version) virus and the previously constructed YF/WN chimera were shown to specifically distinguish between confirmed human SLE and WN cases in a virus neutralization test using patient sera. These chimeras have the potential for use as diagnostic reagents and vaccines against SLE and WN.