Probability of detection of infected mosquitoes as a function of sample sizes (infection rates per 1,000: solid line = 1; dashed line = 5).

Relationship between minimum numbers of mosquitoes required for prescribed detection probabilities and infection rates of mosquitoes. 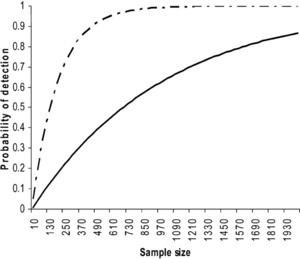 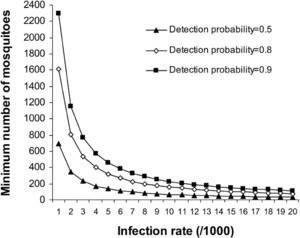 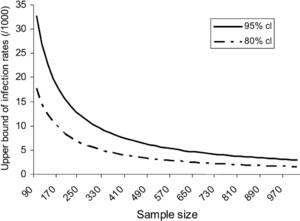 Although estimation of infection rates is important for determining risk of transmission, for many surveillance programs early detection is necessary for focusing control efforts. In this report, we focus on statistical issues regarding the detection of mosquito infections and examine variables affecting detection of mosquito infections in the context of arboviral infections of low infection rates and focal dynamics. Non-detection issues have been extensively investigated in wildlife research6–8 and medical research.1,9 Hanley and Lippman-Hand9 recommended a role of thumb for estimating the upper bound of the 95% confidence limit of infection rates compatible with observations with zero infected individuals in sample size N as 3/N. For example, zero-infected mosquitoes in a sample of 100 has an upper bound of the 95% confidence interval of 3%. This general rule is valid under the circumstances when sample size is not less than 30. Because arboviral infection rates in mosquito populations are low (often measured in infected individuals per 1,000), especially in early periods of the transmission season, non-detection can be a severe problem. Therefore, an investigation of statistical issues regarding non-detection of mosquito infections due to sampling variation is warranted.

For simplicity, we assume that arbovirus testing is perfect, i.e., the sensitivity and specificity of the test are 100%. We further assume that infected and non-infected mosquitoes are equally likely to be captured by a sampling method. Thus, the probability of detection (P) of any infected individuals in a sample of N mosquitoes can be calculated based on the binomial distribution

For sampling design, we can calculate, a priori, the minimal sample size for a specified probability of detection and infection rates by manipulation of equation 1 as

To estimate the upper bound of infection rates, rupper, compatible with observations of a zero-infected individual and a specified confidence interval, equation 1 can be transformed into

In arbovirus surveys, researchers tend to analyze mosquito data by grouping samples from several sites and times to evaluate the role of various potential vector species and to estimate infection rates.10,14–16 However, transmission of arboviruses typically exhibit considerable spatial and temporal variability in mosquito infection rates.12 Therefore, grouping samples over sites scattered across a large area and extended periods of time provides little information about the dynamics of focal transmission and confounds estimation of the detection probability and infection rates. For example, Bernard and others10 reported MIRs for Culex pipiens as 3.53 and 11.42 per 1,000 by grouping samples from all sites and from sites in Staten Island, New York alone, respectively. To identify the focal structure of arbovirus transmission, ideally, samples collected from each sampling site and occasion should be analyzed separately. Grouping samples should be restricted to sites and times where homogeneity in mosquito infection rates can be reasonably justified.

Our theoretical analyses show that detecting low levels of arboviral infections in mosquitoes requires abundant mosquito samples. Therefore, it is not surprising that many surveys failed to uncover positive mosquito pools in the early stages of arboviral transmission. Occurrence of dead birds or human cases may precede the reports of positive mosquito pools. For example, 14 of the 21 patients had illness onsets preceded detection of the first virus-infected mosquito pools in their counties by at least 15 days in the northeastern United States in 2000.17 Early detection of mosquito infection requires intensified sampling and screen large samples of mosquitoes. For example, intensive sampling in the vicinity (3.2 km) of WNV-positive dead birds in three locations in New York City resulted in detection of levels of mosquito infection as low as an MIR of 0.2 per 1,000.18 The high probabilities of detection from their study were attributed to large mosquito samples of 4,728, 6,150, and 6,342 collected in three locations, respectively.

A typical pattern of arbovirus surveillance is to sample mosquitoes from numerous sites over a broad geographic area, such as a mosquito abatement district or an entire county. This often results in small mosquito collections from each site, which is inadequate to achieve early detection at any reasonable levels of probability of detection for the threshold of the infection rate (1:1,000). It may not be feasible to expand intensified surveys to all these sites because of resource restraints. Therefore, cost-effectiveness of various monitor schemes and selection of potential foci for intensified sampling should be prioritized. Instead of sampling numerous sites, each with limited sampling effort, we suggest that for early detection of mosquito infection agencies should focus on sentinel sites with intensified sampling to allow timely detection of low infection rates. The sentinel sites can be environs where potential vector mosquitoes are abundant, or in areas with a history of arbovirus activities of positive mosquito pools, dead birds, and human cases. Advantages of intensified entomologic surveillance at the sentinel sites are elevated probabilities of detection while not increasing overall sampling efforts. For illustration purpose, we designed a hypothetical sampling survey of 10 sites in an area where the mosquito infection rate was 1:1,000. A general sampling protocol collected mosquito samples using light traps at the ten sites with one trap at each site. Assuming average collection at 8 sites of low mosquito abundance are 30 individuals per trap per night, while 150 individuals per trap per night are captured at 2 sites of high density. Weekly sampling at all of the 10 sites results in, on average, 540 mosquitoes. In contrast, selection of the two sites of high mosquito abundance as the sentinel sites and conduction of daily sampling for consecutive 5 days would collect a total of 1,500 mosquitoes with the overall sampling effort of 10 trap-nights. Based on equation 1, the estimated probability of detection with the intensified sampling at sentinel sites is 0.78, which almost doubles the probability of detection, 0.42, with the general sampling protocol.

We echo the reformulation of the views of a zero numerator as highlighted for physicians by Hanley and Lippman-Hand.9 For observations of zero infection in a mosquito sample, the detection probability and/or the upper bound of infection rate should be used as measures of confidence and reported for major vector species in mosquito arboviral surveys. For early warning systems of WNV transmission based on mosquito surveys, sample size is a primary determinant of detection of viral activity in mosquito populations. Intensified entomologic sampling at sentinel sites is a cost-effective alternative to inadequate sampling at numerous sites over broad areas.