Flow diagram of the allocation of gnathostomiasis patients in the groups that received ivermectin or albendazole.

A, A 36-year-old man with gnathostomiasis who presented with subcutaneous migratory swelling in the left cheek for nine days. B, After treatment with ivermectin, the symptoms improved and cleared in three days without any recurrence.

Creeping eruption that developed in a patient with gnathostomiasis after receiving a second treatment with ivermectin.

High-power view of the infiltration of eosinophils in a patient with gnathostomiasis (hematoxylin and eosin stained, original magnification × 40).

Erythematous plaque on the right side of the mid-back of a patient with gnathosotomiasis.

Whole body of an immature adult worm of Gnathostoma spinigerum removed from the edge of lesion from a patient with gnathosotomiasis.

Mean ± SD absolute eosinophil counts (×103/μl) before and after treatment in both groups of patients. 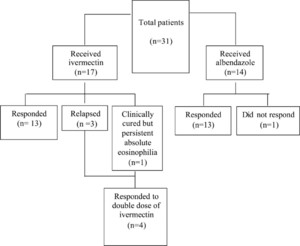 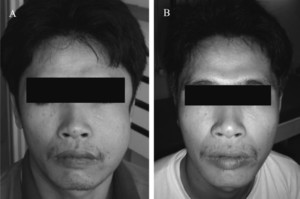 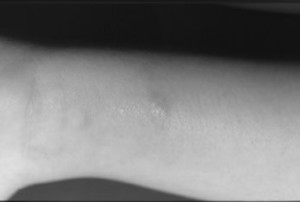 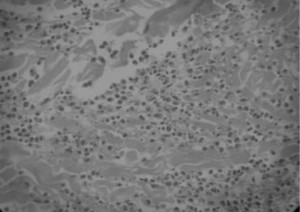 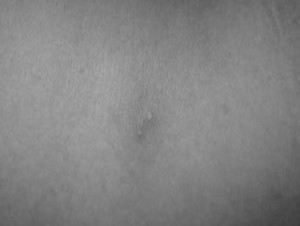 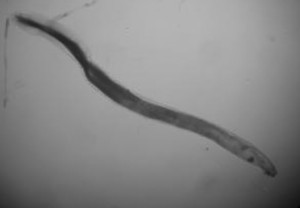 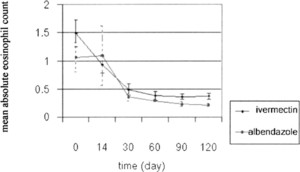 TREATMENT OF CUTANEOUS GNATHOSTOMIASIS WITH IVERMECTIN

In a randomized open study, we compared the efficacy of a single dose of oral ivermectin (200 μg/kg) and oral albendazole (400 mg/day for 21 days) for the treatment of cutaneous gnathostomiasis. Thirty-one patients were randomly assigned to receive ivermectin (n = 17) or albendazole (n = 14). Thirteen of 17 patients who received ivermectin responded, 3 relapsed, and 1 was unresponsive (cure rate = 76%). Thirteen of 14 patients who received albendazole responded very well and did not relapse. Only one patient was unresponsive (cure rate = 92%; P > 0.05). No major side effects were observed in both groups. We concluded that a single dose of ivermectin (200 μg/kg) is less effective than albendazole (400 mg/day for 21 days) for treatment of cutaneous gnathostomiasis, but there was no statistically significant difference (P > 0.05).