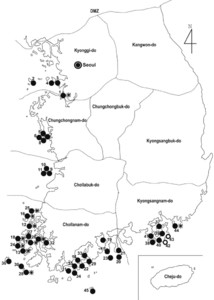 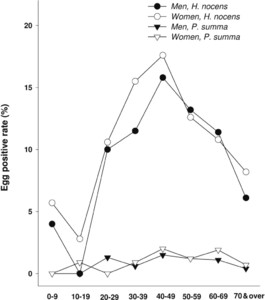 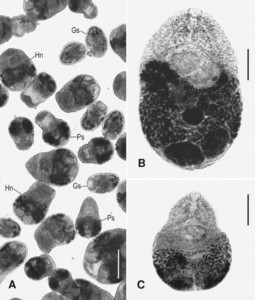 To determine the distribution and prevalence of heterophyid fluke infections on coastal islands of the Republic of Korea, fecal specimens were collected from 4,179 people residing on 45 islands in the West (Yellow) and South Seas and examined using the formalin-ether and Kato-Katz techniques. Eggs of Heterophyes nocens were found in 459 (11.0%) residents of 42 islands, with an average number of eggs per gram (epg) of feces of 79.6. Eggs of Pygidiopsis summa were found in 49 (1.2%) on 12 islands, with an average epg of 253.0. The egg-positive rate for H. nocens was the highest on Chungdo (32.6%), followed by Imchado (27.3%); P. summa was most prevalent on Imchado (15.2%). The majority (78.9% [362 of 549] of those infected with H. nocens and 81.6% [40 of 49] of those infected with P. summa) of those infected were adults more than 40 years old. Adult flukes of these species were recovered from residents of Imchado by treatment with praziquantel and purgation. Our results indicate that H. nocens and P. summa are indigenous to the southern and western coastal islands of the Republic of Korea.