Determination of 50% lethal concentration (LC50) values for Strongyloides ratti (A) and Ancylostoma caninum (B) larvae after exposure to thiabendazole (A1 and B1) or ivermectin (A2 and B2) for 24, 48, or 72 hours (hr). Larvae were placed onto assay plates containing thiabendazole or ivermectin at a range of concentrations, and held at 25°C for the stated times before motility was assessed; n = number of separate assays; error bars indicate standard errors.

Effects of storage at various temperatures on motility of Strongyloides ratti (A) and Ancylostoma caninum (B) larvae and determination of 50% lethal concentration (LC50) values with thiabendazole and ivermectin. Larvae were held for various times at 20°C (▪), 25°C (□), or 29°C (▾) and then placed onto drug assay plates and held for 48 hours at 25°C before assessment of motility in control (A1 and B1) or drug-effected wells of the plate (A2, A3, B2, and B3). For A1 and B1, data shown are the mean ± standrard error, n = 10–21 separate wells. For A2, A3, B2, and B3, data shown are the LC50 calculated using motility data from duplicate or triplicate assay wells at each of 4–5 drug concentrations.

Typical dose response for Strongyloides ratti (▪), Ancylostoma ceylanicum (•), A. caninum (○), S. stercoralis (♦), and Necator americanus (▵) after a 48-hour exposure to thiabendazole or ivermectin. Each data point represents the mean ± standard error of motility scores of three replicate wells at each drug concentration, expressed as a percentage relative to the mean of 9–21 control wells, except for S. stercoralis where each data point represents the mean of duplicate assay wells. 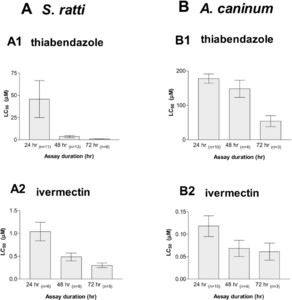 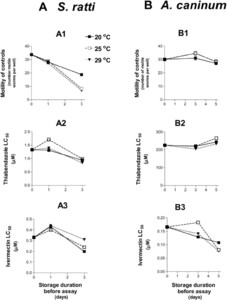 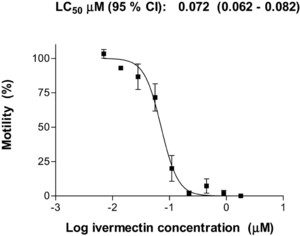 With the implementation of programs to control lymphatic filariasis and soil-transmitted helminths using broad spectrum anthelmintics, including albendazole and ivermectin, there is a need to develop an in vitro assay for detection of drug resistance. This report describes an in vitro assay for measuring the effects of ivermectin and benzimidazoles on the motility of larvae of the hookworm species Ancylostoma ceylanicum, A. caninum, and Necator americanus, and Strongyloides species including Strongyloides stercoralis, and S. ratti. A dose-response relationship was demonstrated with each of the parasite species, with distinct differences observed between the various species. In pilot field testing of the assay with N. americanus larvae recovered from human fecal samples, a dose-response relationship was observed with ivermectin. While the assay has demonstrated the ability to determine drug responsiveness, its usefulness in resistance detection will require correlation with the clinical outcome among individuals infected with parasite strains showing different drug sensitivities.