Percentage of live female Onchocerca volvulus by country in the study population versus the historical control before the introduction of ivermectin. Error bars represent the upper 95% confidence intervals and the asterisk indicates a significant difference from the control, Mexico, and Guatemala at the P < 0.05 level.

Digital analysis of nodule size (area in mm2 and perimeter in mm) of material from Mexico, Guatemala, and Ecuador. Error bars show the standard error. 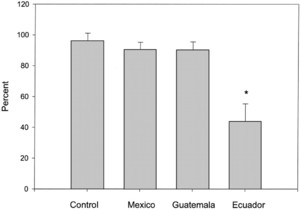 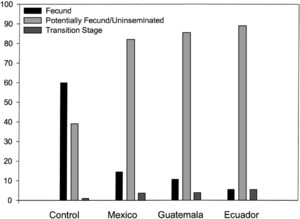 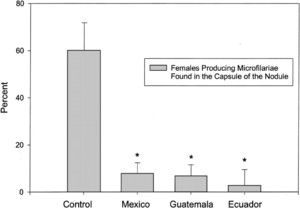 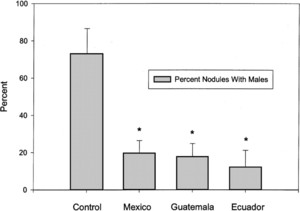 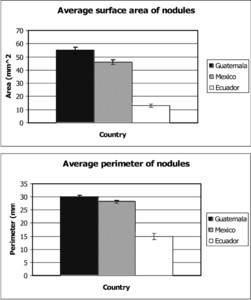 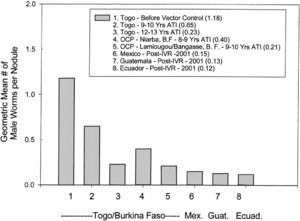 The objective of this study was to examine nodules from Mexico, Guatemala, and Ecuador collected over a one-year period (2001) to determine the effects of semi-annual ivermectin treatments on Onchocerca volvulus macrofilarial populations. Nodules were sectioned, stained with hematoxylin and eosin, and histologic findings were compared between countries and with historical data prior to the introduction of ivermectin into the region. Nodules from Ecuador had 10 times more dead or moribund worms than the historical control (66.6% versus 6.5%); nodules from patients from Mexico and Guatemala did not differ from the control. More than 80% of the female worms in each country were uninseminated and producing unfertilized oocytes. Nodules containing males differed in each country from the historical control (P < 0.0001), with presence of males ranging from 19.7% in Mexico to 13.6% in Ecuador versus 73% in the control. Nodules with females producing active microfilariae ranged from 7.8% (Mexico) to 2.7% (Ecuador) versus 60% in the historical control (P < 0.0001). Nodules from Ecuador and Mexico were significantly smaller in size than those from Guatemala or historical controls (P < 0.0005). These results depict a deteriorating condition of adult O. volvulus populations in Mexico, Guatemala and Ecuador, indicating that semi-annual ivermectin treatment of ≥6 years has had a profound effect on survival and reproduction of this species.