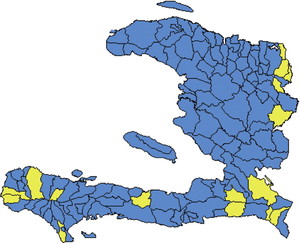 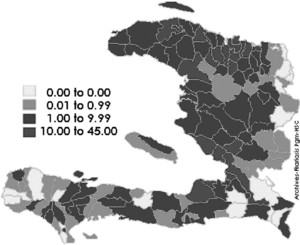 Although lymphatic filariasis is known to have been endemic in Haiti since at least the mid 1700s, a national filariasis survey has never been conducted. As a first step in the national program to eliminate filariasis, we collected blood in January-April 2001 from 50–250 school children (6–11 years old) in all 133 communes of the country using an adaptation of the lot quality assurance sampling method. Of 22,365 children tested, 901 (4.0%) were positive for circulating Wuchereria bancrofti antigen. When weighted by commune population, the overall national antigen prevalence in this age group was 7.3%. Infected children were found in 117 (87.9%) communes, the most heavily affected areas being concentrated in the northern part of the country. In only 16 (12.1%) communes were all 250 children antigen negative. Thus, W. bancrofti infection in Haiti is much more widespread than previously realized; virtually the entire population of the country may be considered at risk of infection.