Representative titration curves of benznidazole-treated adolescents in Brazil. Serum samples were tested by a chemiluminescent enzyme-linked immunosorbent assay with purified trypomastigote mucin antigen (A&T CL-ELISA) in duplicate before treatment (time 0) and 2, 5, 8, 14, 38, and 74 months after treatment with benznidazole (Bz) or placebo (Pl). Each circle represents the average of two simultaneous determinations. Top six panels, Bz-treated patients. Bottom three panels, Pl-treated patients. Codified patients are represented by numbers. In all cases, the standard error for each serum sample tested in duplicate was less than 10%. Logarithmic, power, or exponential equations and r values for each titration curve are shown. The horizontal dotted lines represent the cut-off titer (1.00). 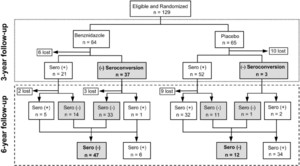 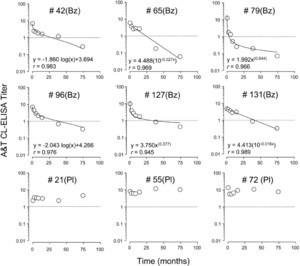 Data from a six-year follow-up of Trypanosoma cruzi-infected adolescents enrolled in a randomized, double-blind, clinical trial of benznidazole showed successful chemotherapy in 64.7% (95% confidence interval [CI] = 50.2–78.7) and 84.7% (95% CI = 66.8–92.9), respectively, by intention-to treat and by per protocol analysis measured by seronegativity in a chemiluminescent enzyme-linked immunosorbent assay with a purified trypomastigote mucin antigen. No incident case of cardiomyopathy was detected by electrocardiogram assessment in this cohort of adolescents who had been infected in childhood. The persistent and consistently long-term negative serologic reactions suggest the absence of the parasite in the treated patients and reinforces the recommendation of early benznidazole chemotherapy for T. cruzi-infected infants as a public health policy in endemic areas.