Study area in Argentina. The black area shows Chaco Province and the white square shows the area where samples were collected. 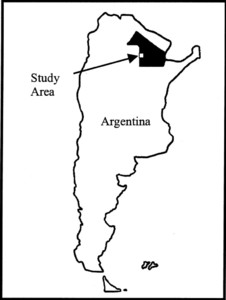 We studied the seroprevalence of antibodies against Trypanosoma cruzi in the human population along with domiciliary infestation by triatomine bugs in an area endemic for Chagas disease in the Chaco Province of Argentina. In addition, we carried out parasitologic surveys in patients, dogs, wild mammals, and vectors. The mean seroprevalence in humans was 27.81% (109 of 392) and 24.14% (63 of 261) in 1–15-year-old children. The minimum domiciliary infestation rate was 13.33%, with certain areas reaching 53.85%. The prevalence was 15.09% (16 of 106) in dogs and 35.71% (10 of 28) in opossums. Infection with T. cruzi was detected in 30.10% (59 of 196) of the Triatoma infestans tested. Compared with nationwide studies, our data suggest that 1) there are zones requiring immediate sanitary action, and 2) nationwide estimates are based on very heterogeneous epidemiologic situations. This heterogeneity emphasizes the importance of in-depth studies of restricted areas to provide additional information for a better understanding of the present status of Chagas disease in Argentina.