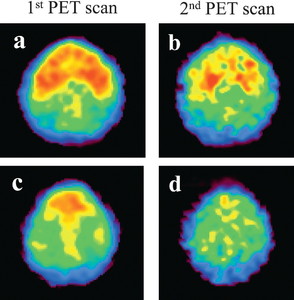 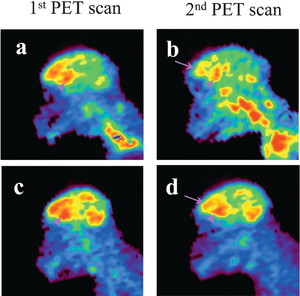 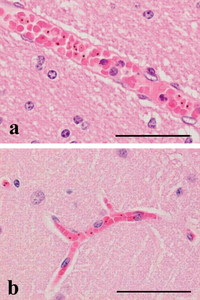 Cerebral malaria (CM) is a major complication of severe human malaria and is defined as an acute encephalopathy arising from Plasmodium falciparum infection.1,2 Human post-mortem studies of CM showed that erythrocytes containing malaria parasites sequester in cerebral capillaries and venules.3,4 Although several studies of hemodynamic cerebral perfusion have been performed in living human patients,5–9 the correlation between pathologic changes and altered metabolic activity, which may directly reflect neurologic symptoms in CM patients, is not clearly understood.

In the present study, to further elucidate cerebral metabolic activity in CM, we carried out whole-body fluorine 18-fluorodeoxyglucose-positron emission tomography (FDG-PET) of P. coatneyi-infected Japanese macaques for the first time. The utility of the P. coatneyi Japanese macaque model for study of CM was demonstrated by the identification of cytoadherence of infected erythrocytes to brain endothelial cells within microvessels in vivo, similar to that seen in human CM.10,11 We demonstrate here the correlation between cerebral metabolic activities and neuropathologic changes in severe malaria with cerebral involvement.

Two monkeys, J31 (male) and J32 (female), which were three-year-old Japanese macaques (Macaca fuscata) weighing approximately 3.5 kg each, were examined. Both monkeys were bred and grown in animal facilities in Japan. The investigators adhered to the Guidelines for the Use of Experimental Animals authorized by the Japanese Association for Laboratory Animal Science. Healthy monkeys were examined by FDG-PET as control studies, and artificial infection was performed in the same monkeys by injecting approximately 1 × 109 frozen P. coatneyi-infected erythrocytes (CDC strain) intravenously as previously reported.10 After inoculation (12–13 days), they developed a fulminating acute infection.

The PET scans of monkeys J31 and J32 were performed twice, before (first PET scan) and after (second PET scan) malarial infection, in a fasting condition. On administration of FDG and during FDG-PET scans, both monkeys were anesthetized with isoflurane. Although inhalational anesthesia with isoflurane should also reduce whole brain metabolism, it is known that the pattern of regional metabolism with it is not significantly different from that in awake codition.12,13 We used low-dose inhalation (1% isoflurane with air at a rate of 4.0 liters/minute) until injected FDG was distributed into the brain tissue. During PET scans, we used a relatively high dose (2–3%) of isoflurane to avoid body movement. The condition of anesthesia for infected monkeys was the same as for uninfected monkeys.

After the second FDG-PET scans, the monkeys were exsanguinated under anesthesia with an intramuscular injection of ketamine-HCl (15 mg/kg). They were then autopsied and their major organs, including the brain, were weighed and processed for histopathologic examination.

The FDG was produced in the cyclotron facility of Gunma University. The PET scans were performed using a whole-body PET scanner (SET2400W; Shimadzu Corp., Kyoto, Japan). Transverse resolution at the center of the field of view was 4.2 and 5.0 mm full width at half maximum.

The FDG-PET images were obtained after administration of approximately 74–144 MBq (2–4 mCi) of FDG intravenously. To obtain an accurate input function, which was used for evaluating the cerebral metabolic rate of glucose (CMRglc) from the PET images, intermittent arterial blood samplings were performed through a small catheter placed in the femoral artery just after FDG injection. Static PET images were obtained in supine position 70–100 minutes after FDG injection. Attenuation-corrected images with FDG were reconstructed into 256 × 256 matrices with pixel dimensions of 2.0 mm in plane and 3.125 mm axially. Based on the input function obtained by intermittent arterial blood sampling, the CMRglc images were calculated using an autoradiographic method. In the calculation, K values were assumed to be the same as those of human brain. We manually placed regions of interest (ROI) on the corresponding areas in the CMRglc images, and evaluated the serial changes in regional CMRglc associated with malarial infection.

Figure 1 shows axial CMRglc images for monkey J31 before and after malarial infection. Diffuse and heterogeneous metabolic reduction occurred in the frontal and temporal lobes, and no differences were found between the right and left hemispheres. Figure 2 shows sagittal images of monkey J31 and J32 before and after malarial infection. In both cases, regional CMRglc decreased in the cerebral cortex, but was almost unchanged in the basal ganglia. However, shown in Figure 2b and d, however, CMRglc images of monkey J31 with a high parasitemia exhibited a more heterogeneously reduced pattern than those of monkey J32 with a low parasitemia. Table 1 shows serial changes in regional CMRglc of monkeys J31 and J32 evaluated by ROI analysis. Because FDG had been injected under anesthesia, regional CMRglc values were small and metabolic activity in gray matter was suppressed to the same level as in white matter. Although there was a strong biasing effect of anesthesia, regional CMRglc in the frontal and temporal lobes decreased by 10–20% with malarial infection, as shown in Table 1. Furthermore, CMRglc reduction in the cerebellum was not as significant as in the frontal and temporal lobes in both monkeys. The ROI analysis showed slightly increased regional CMRglc in the basal ganglia.

Neuropathologic examination, as shown in Figure 3, showed preferential sequestration of parasitized red blood cells in the cerebral capillaries, as observed in human CM patients. In both monkeys, the degree of sequestration in the frontal and temporal lobes did not clearly differ from that in the parietal lobe and cerebellum. The degree of sequestration in monkey J31 appeared to be slightly higher than that in monkey J32. Hemorrhagic change or neuronal necrosis was not found in hematoxylin and eosin-stained and Nissl-stained tissues of monkeys J31 and J32.

In both monkeys examined, regional CMRglc decreased in the cerebral cortex, but was almost unchanged in the basal ganglia. Although monkey J31 had a higher parasitemia than monkey J32 and exhibited severe clinical manifestations, there was little difference between monkeys J31 and J32 in cerebral metabolic reduction pattern, as shown in Table 1. Therefore, this reduction in cerebral metabolic activity may develop before neurologic symptoms are clearly observed in severe malaria.

Warrell and others6 previously reported that cerebral blood flow (CBF) in patients with CM was within normal range, and that cerebral oxygen consumption and cerebral arteriovenous oxygen content difference were subnormal. Furthermore, Newton and others7 reported that CBF velocity increases by 30% in children with CM. Recently, Clavier and others8 also reported normal-range jugular bulb venous oxygen saturation. These findings are consistent with the reduction in cerebral metabolic activity we directly observed for the first time. Conversely, Kampfl and others9 performed single photon emission computed tomography examination of distributional changes in CBF in a P. falciparum-infected human CM patient, and found that focal right hemispheric hypoperfusion and decreased oxygen saturation correlated with precision with the right hemispheric localizing signs of the patient. Local cerebral hypoperfusion should induce metabolic changes in the same region. We believe that the cerebral metabolic reduction observed in this study may protect against local hypoperfusion.

Furthermore, in our study, neuropathologic examination was performed on brain tissues just after FDG-PET scans. We did not find petechial hemorrhage, one of the pathologic features of CM, or necrosis in the brain tissues of monkeys J31 and J32. This suggests that the reduction in cerebral metabolic activity observed by FDG-PET occurs before parenchymal changes appear in the brain of CM patients, and that initial reduction of metabolism is reversible. We believe that reduction in cerebral metabolic activity is a hypoxic adaptation to impaired microcirculation in brain tissue, which may be induced by nitric oxide or other cytokines. We have observed increase in plasma levels of tumor necrosis factor-α and interferon-γ in P. coatneyi-infected Japanese macaques (Kawai S and others, unpublished data). Moreover, plasma levels of soluble intercellular adhesion molecule-1 and soluble vascular cell molecule-1 are significantly increased in the severe phase of malaria infection in this animal model.14 Increases in plasma levels of some cytokines or other molecules is thought to be a critical step in the pathogenesis of severe malaria in vivo. White suggested that coma in CM is a neuroprotective reaction.5 Such a reduction in metabolism is considered suitable for decreasing energy consumption and minimizing brain damage with pathologic changes.15 This may be one of the reasons why most CM patients have no neurologic sequelae after recovery, and why recovered CM patients exhibit reversible coma. Follow-up examinations of a human patient who recovered from CM showed regular cerebral perfusion and oxygenation patterns.9

In this study, we focused on the cerebral metabolic changes induced by severe malaria. We observed diffuse cerebral metabolic reduction in the acute phase of malarial infection. To determine in detail the mechanisms of the complicated pathophysiologic phenomena associated with the neurologic syndrome in CM patients, and to evaluate the effectiveness of treatments using anti-malaria agents or anticonvulsants for seizure prophylaxis effective for prevention of neurologic sequelae,16,17 further correlative studies on cerebral metabolism are needed.