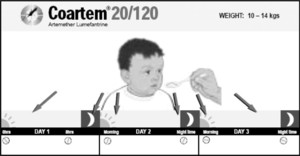 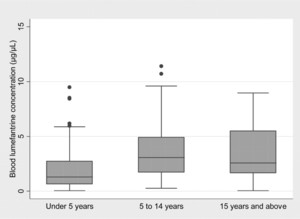 Measuring baseline levels of adherence and identifying risk factors for non-adherence are important steps before the introduction of new antimalarials. In Mbarara in southwestern Uganda, we assessed adherence to artemether-lumefantrine (Coartem®) in its latest World Health Organization blister formulation. Patients with uncomplicated Plasmodium falciparum malaria were prescribed artemether-lumefantrine and received an explanation of how to take the following five doses at home. A tablet count was made and a questionnaire was completed during a home visit. Among 210 analyzable patients, 21 (10.0%) were definitely or probably non-adherent, whereas 189 (90.0%) were probably adherent. Age group was not associated with adherence. Lack of formal education was the only factor associated with non-adherence after controlling for confounders (odds ratio = 3.1, 95% confidence interval [CI] = 1.1–9.7). Mean lumefantrine blood levels were lower among non-adherent (n = 16) (2.76 μg/mL, 95% CI = 1.06–4.45) than among adherent (n = 171) (3.19 μg/mL, 95% CI = 2.84–3.54) patients, but this difference was not statistically significant. The high adherence to artemether-lumefantrine found in our study suggest that this drug is likely to be very effective in Mbarara provided that patients receive clear dosage explanations.