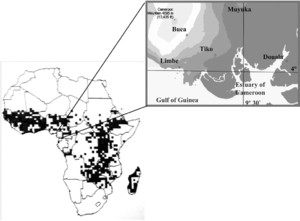 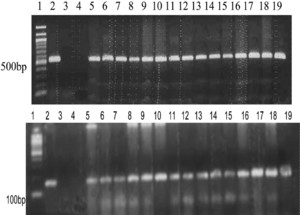 Rickettsia africae was identified in seven (6%) of 118 patients with acute fevers of unknown etiology proven not to be malaria or typhoid fever from clinics along the coastal region of Cameroon by polymerase chain reaction (PCR) amplification and sequencing of the citrate synthase (gltA) and outer membrane protein A (ompA) genes of Rickettsia. The majority (71%) of the patients were female. Clinical manifestations included fever (100%), headache (71%), myalgia (71%), arthralgia (43%), pulmonary involvement (29%), and diffuse rash (14%). Moreover, R. africae was detected by PCR amplification and sequence analysis of the gltA and ompA genes in 62 (75%) of 83 adult Amblyomma variegatum ticks collected from cattle in the same region. These results confirm the presence of a previously unrecognized infectious disease in the indigenous Cameroonian population, as well as extend the established range of R. africae.