Right forearm of the 50-year-old patient showing an ulcer and erythema over enlarged epitrochlear nodes.

A, Top view of the uncapped container of hand wash detergent. B, Portion of garden hose used for dispensing detergent. 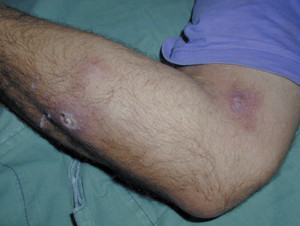 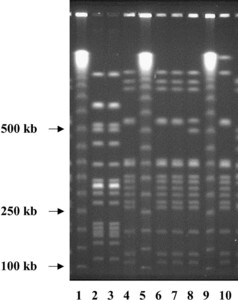 Two mechanics working at a garage in tropical northern Australia simultaneously developed upper limb melioidosis ulcers. Both patients had Burkholderia pseudomallei of identical pulsed-field gel electrophoresis (PFGE) type (Spe I). Environmental sampling identified B. pseudomallei in a container of commercial hand wash detergent as the likely source of infection, although there were multiple isolates of different PFGE types to the clinical isolates.

Melioidosis is the disease manifested by infection with the gram-negative bacillus Burkholderia pseudomallei. It is a soil and water bacterium endemic in both southeast Asia and northern Australia,1–3 and is increasingly identified outside these regions.4 Melioidosis occurs in both animals5 and humans.6,7 In the tropical “Top End” of the Northern Territory of Australia, melioidosis is the most common cause of fatal community-acquired bacteremic pneumonia.6,8 Melioidosis is most commonly observed during the monsoonal wet season,8–11 with incidences usually peaking after heavy rainfall.10,12 The majority of fatal cases have one or more risk factors, most importantly diabetes, but also alcoholism, chronic renal disease, chronic lung disease, and malignancy or immunosuppressive therapy.8,10 Occupations with frequent exposure to soil and surface water have also been implicated as an important risk factor for acquiring melioidosis.10,12,13 For example, agricultural occupations primarily in rice farming and animal husbandry present a significant risk.10,14,15 We describe here two cases of melioidosis that were associated with unusual occupational exposure.

Two men, 43 and 50 years old, respectively, simultaneously developed ulcerated upper limb skin lesions following a period of monsoonal rains. The skin lesions persisted for six weeks before one of the individuals sought treatment for other symptoms of melioidosis. They were both vehicle mechanics in a remote town garage that lies within the endemic region for melioidosis in the Top End of the Northern Territory.

The 43-year-old patient presented to Royal Darwin Hospital after 4–5 days of fever and a six-week-old non-healing lesion on the right hand. The patient also had type 2 diabetes mellitus. Clinical examination identified large right epitrochlear and axillary lymphadenopathy. Swabs from the hand lesion and purulent fluid drained from axillary lymphadenitis both grew B. pseudomallei. Blood cultures were negative and a computed tomography (CT) abdominal scan identified several small hypodensities in the spleen suggesting splenic abscesses. Melioidosis serology using an indirect hemagglutination assay (IHA) showed a titer of 1:640. He was treated with open drainage of the axillary lymphadenitis, intravenous ceftazidime, and oral trimethoprim/sulfamethoxazole. After four days, the patient was afebrile and the right hand lesion had healed. The lymphadenitis resolved after two weeks of intravenous ceftazidime and he subsequently completed an additional three months of oral trimethoprim/sulfamethoxazole. A repeat CT scan showed that the splenic lesions had completely resolved.

The 50-year-old patient was sent to Royal Darwin Hospital following the diagnosis of melioidosis in his co-worker. He had a similar six-week-old non-healing skin lesion on his right forearm (Figure 1). Following the onset of the lesion, which was initially purulent, the patient had lethargy and fever but after two weeks the symptoms spontaneously resolved. His only medical risk factor for melioidosis was an estimated average daily alcohol consumption of 60 grams. At admission, the patient was afebrile, with the only abnormalities being the 1-cm diameter forearm abscess and enlarged right epitrochlear lymph nodes with overlying erythema. The skin lesion cultured B. pseudomallei, blood cultures were negative, and IHA titer was 1:5,120. He was treated with two weeks of intravenous ceftazidime together with oral trimethoprim/sulfamethoxazole, followed by three additional months of trimethoprim/sulfamethoxazole. The skin lesion and lymphadenopathy resolved in the first week of therapy.

The hand wash detergent from the garage was selectively cultured for B. pseudomallei, in which approximately 2% of total detergent volume was diluted with sterile water and filtered through several 0.2-μm filters (Millipore Corporation, Bedford, MA). Filters were cultured separately in Ashdown’s broth (Oxoid Australia, Melbourne, Victoria, Australia) followed by the culture of any broth biofilm on Ashdown’s agar (Oxoid Australia). All B. pseudomallei isolates cultured were confirmed biochemically using the MicroScan Walkaway (Dade Behring, Deerfield, CA).

The mechanics primarily worked on off-road vehicles that were frequently covered with mud and soil, especially as occurred during the heavy monsoonal rains in the period preceding their infection. Other than the usual arm and hand lesions associated with mechanical work, neither mechanic could recall a specific inoculating event. The clinical isolates from each patient were typed using PFGE and were found to have identical Spe I restriction patterns (Figure 2), of a type that we have not seen previously in other Northern Territory isolates (Currie B, Mayo M, Gal D, unpublished data), suggesting a common source of infection or perhaps a transfer of infection between mechanics. Subsequent investigations of the garage workshop identified B. pseudomallei in an uncapped container of commercial hand wash detergent (Figure 3A). Several closely related B. pseudomallei strains were isolated and were found to be distinctly different from the clinical strain (Figure 2). It is extremely unusual in endemic locations to find B. pseudomallei in any environmental samples apart from soil and water. Although the clinical strain was not cultured from the detergent, it remains the likely infection source; only a small portion of detergent was cultured and the detergent contained more than one strain of B. pseudomallei.

The detergent is likely to have been contaminated by the reintroduction of a garden hose (Figure 3B) that was used repeatedly by the mechanics to dispense detergent into the palms of their hands. Microbial contamination of antiseptic and disinfectant products is not uncommon and is well documented in the literature.19–23 Melioidosis has been documented in humans following contamination of chlorhexidine/cetrimide (Savlon) antiseptic solution,24 and we have documented a similar outbreak among four cats treated at a single veterinary center.5

The B. pseudomallei-contaminated detergent was replaced with a new container of detergent, which was fitted with a pump dispenser to prevent the possibility of future bacterial contamination. Commercial suppliers subsequently fitted pump dispensers to detergent containers throughout the melioidosis-endemic region of the Northern Territory.