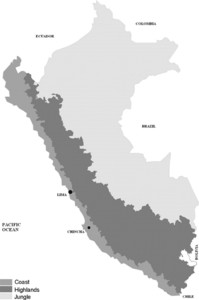 SHORT REPORT: ENDEMIC FOCUS OF CYSTIC ECHINOCOCCOSIS IN A COASTAL CITY OF PERU

No evidence of Echinococcus granulosus infection has been described in the coastal region of Peru, with the exception of the capital city of Lima. Anecdotal evidence suggests the existence of a focus of echinococcosis in the coastal city of Chincha, located south of Lima. We conducted a preliminary epidemiologic study in Chincha, which included an ultrasound, chest radiography, and serologic survey of abattoir workers, a review of medical records from local hospitals, and examination of the intestines of stray dogs to determine the presence of canine echinococcosis. Among 25 abattoir workers examined for the presence of cystic echinococcosis, we found three (12%) subjects with echinococcal cysts. A review of medical records showed a surgical incidence of 32/100,000 for the period 1996–1998. Three of 48 dogs (6.25%) were found to be infected with E. granulosus tapeworms. This study demonstrates the existence of an undocumented endemic focus of E. granulosus previously unknown in the coastal region of Peru.

Cystic echinococcosis (CE), an infection caused by the larval form of Echinococcus granulosus, is a major public health problem in sheep-raising regions of Peru.1,2 The geography of Peru is highly varied, ranging from coastal desert to high altitude sierra, to Amazonia basin jungle, with gradations of intervening climatic zones. Cystic echinococcosis is known to be highly endemic in the highlands where the prevalence of human, canine, and ovine echinococcosis have been reported to be 9%, 46%, and 65%, respectively.3 No cases of CE have been described in the jungle region. Autochthonous cases of human and canine echinococcosis have been reported in the capital city of Lima.4,5 There are a few coastal cities surrounded by rural areas where conditions may be adequate for the existence of E. granulosus infection in animals and humans. Anecdotal clinical reports suggest the existence of CE in the coastal city of Chincha located south of Lima. Given the absence of data, we conducted a study in Chincha to establish the presence of autochthonous cases of human and canine echinococcosis. We examined workers from the local city abattoir using imaging and serologic techniques, reviewed medical records from city hospitals for evidence of CE surgical treatment, and examined the intestines of stray dogs for the presence of E. granulosus tapeworms.

The coastal city of Chincha (population = 52,661) is located 185 km south of Lima at an elevation of 97 meters above sea level (Figure 1). The population is engaged mainly in agricultural and farming activities. Cattle, sheep, and swine are brought from rural areas surrounding the city or from the Andean region to be slaughtered at the municipal abattoir. Forty-five slaughterhouse workers were asked to volunteer for serologic, ultrasonographic, and chest radiographic examinations. The study was reviewed and approved by the ethical review boards of Universidad Peruana Cayetano Heredia, The Johns Hopkins School of Hygiene and Public Health, and Asociacion Benefica PRISMA. Individuals were examined in the supine position using a Shimasonic SDL-32 3.5-MHz portable ultrasonograph (Shimadzu, Kyoto, Japan) with liquid paraffin as the transducing medium. A brief medical examination was performed prior to examination. Posterior-anterior chest radiographs were taken at Hospital San Jose de Chincha. Human blood samples were obtained by venipuncture and taken to the Department of Microbiology at Cayetano University. Samples were centrifuged and the sera were aliquoted and stored at −20°C until tested. An enzyme-linked immunoelectrotransfer blot (EITB) for the diagnosis of human CE, which identifies three antigens (8, 16, and 21 kD), was performed as previously described.6 Workers were shown pictures of hydatid-infected offal and asked if they had ever seen such lesions in the animals slaughtered in the facility. They were questioned about infected viscera disposal, veterinary inspection, presence of stray dogs inside or surrounding the abattoir, and a history of CE among them. Medical records from patients who were surgically treated for CE at Hospitals San Jose and Rene Toche were obtained for the period 1996–1998. Forty-eight stray dogs from areas surrounding the abattoir were captured and humanely killed. The intestines of freshly killed animals were removed and preserved by inoculating the lumen with 10% formaldehyde and keeping them in the same solution until opened for study. The intestines of dogs were opened and examined for E. granulosus at the School of Veterinary Medicine of the Universidad San Antonio de Gonzaga in Ica.7

Three of 25 individuals (12%) had either liver or lung cysts detected by ultrsonographic scanning or chest radiographic examination. All were positive on the EITB for CE. One was a 50-year-old man who had a history of surgery for liver CE five years before the study. Ultrasound examination showed a 5.2-cm unilocular cyst in the right lobe of his liver. A second case with liver involvement was a 42-year-old woman with no previous history of CE. A unilocular cyst 4.7 cm in diameter was observed in the right lobe of her liver. The third was a 57-year-old man who had a chest radiograph image compatible with a hydatid cyst in his left lung. All were asymptomatic. The results of physical examinations were normal in all three individuals. None gave a history of residence in an endemic area in the Andean region of Peru. All workers examined admitted having seen dogs at some point in the past inside the facility, and one admitted to regularly take livestock offal to feed his dog. All workers had seen hydatid cysts at some point in the past in the abattoir, but none knew how the disease was transmitted to animals. Veterinary supervision was performed occasionally. Except for the one worker with a previous history of hydatidosis, no other worker gave a history of past hydatidosis diagnosis or surgery. During the period from 1996 through 1998, 50 patients who were residents of Chincha were surgically treated and had a pathologic confirmation of CE at both hospitals. The most frequent site of the hydatid cyst was the lung in 39 patients (78%), the liver in 6 (12%), and the lung and liver in 5 (10%). The age distribution was 3 in those 5–14 years old, 11 in those 15–24 years old, 14 in those 25–44 years old, 9 in those 45–64 years old, and 13 in those ≥ 65 years old; 58% (29) were males. The mean age of the patients was 47 years. Based on data from the 1993 National Census,8 the mean annual surgical incidence per 100,000 population for the period covered was 32.0. Of the 48 stray dogs collected from the areas surrounding the abattoir, three were infected with E. granulosus (6.25%).

We demonstrated the existence of a previously undocumented endemic focus of human and canine echinococcosis in the coastal city of Chincha, Peru. This is the first time that autochthonous cases of CE have been demonstrated in a coastal urban center other than the capital city of Lima. A previous study in a Lima Hospital reported the occurrence of urban cases of CE, but no links could be established to city abattoirs and the presence of other risk factors was not reported.4 Urban cases of CE acquired in abattoirs have been described in Arequipa, the second largest city in Peru, which is located in the southern Andean region, an area known to be endemic for E. granulosus (Naquira F, unpublished data). In the present study, we were able to demonstrate that stray dogs from areas surrounding the abattoir were infected with E. granulosus tapeworms. There are a number of factors that would make the abattoir near Chincha a likely source of Echinococcus infections in dogs. The animals slaughtered came from rural areas surrounding the city. An undetermined number of slaughtered animals may be infected with hydatid cysts because most workers admitted having seen hydatid-infected offal. We presume that some hydatid-infected offal may be improperly discarded since veterinary supervision was performed occasionally. Some hydatid-infected offal may also reach city markets through informal channels known to occur in other abattoirs located in Andean cities (Lopera L, unpublished data).

Prior to this study, one of the authors (PLM) conducted interviews with five patients who were referred from Chincha to a Lima City Hospital for specialized surgical treatment of CE. There was no evidence of travel to endemic areas in the Peruvian Andes, but travel to coastal rural areas surrounding the city was reported. In addition, a 10-year review of medical records (1985–1994) at one Chincha hospital showed 64 cases of CE (Moro P, unpublished data). These previous observations and the surgical cases documented in this study suggest that the cycle of E. granulosus may be occurring in rural areas surrounding the city and may not be limited exclusively to an urban cycle of the parasite.

We were not able to examine all abattoir workers; thus our prevalence estimates may have overestimated or underestimated the true prevalence of CE. Data on hydatidosis in livestock could not be collected because we were denied access to the abattoir during the slaughter of livestock. The coastal region of Peru had been considered to be non-endemic for E. granulosus.9 However, this study demonstrates that an urban cycle of E. granulosus is occurring in the coastal city of Chincha. It remains to be determined which surrounding rural areas may be endemic for E. granulosus. Further portable imaging studies of the human population and coproantigen enzyme-linked immunosorbent assay surveys of the dog population will help determine the true prevalence of echinococcal infection in these communities.